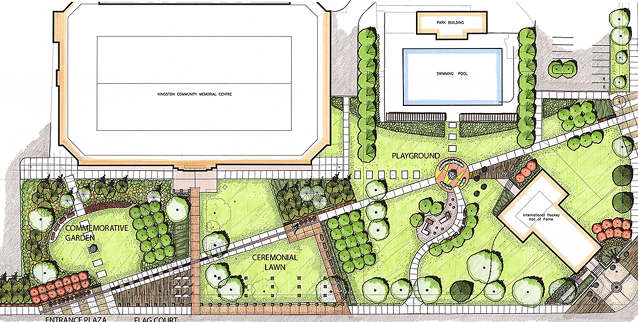 Regarding the Memorial Centre, we’ve said it all, and you’ve likely heard it all before. Moving well beyond an argument surrounding the viability of the K-Rock Centre, the fact remains that the M-Centre is still standing and in desperate need of repairs. The issue of revitalization extends above and beyond the hockey arena, as the entire grounds need to be overhauled. Lately there has been an argument brewing in the shadows between the City and organizers of Kingston’s Fall Fair, as the two sides aren’t seeing eye to eye on what the Memorial Centre and grounds should look like in the future. With that in mind, the City of Kingston has yet again put out a call for input into the design of the new Veterans’ Garden, which will be located on the south side of the property, closest to York Street.

From the City’s website: “three design concepts will be presented at a community workshop on March 9th, in the Cafetorium of Regi High at 6:30 pm.  This will be followed by a workshop discussion on what attendees like, and elements from each of the concepts to be explored further.  The ultimate design is intended to be a memorial within a garden commemorating sacrifice — a “sacred space” and a functional park for everyday use.  Each concept includes places for reflection and ceremonial events, spaces for sculpture and commemorative features, connecting paths, sitting areas, areas for interactive education and connections to the playground.  What ideas do you really like? What design elements would you like to see carried forward to the final design?”

From my understanding, the three Veterans’ Garden concepts fit into four larger constructs for the overall redevelopment of the entire Memorial Centre grounds.  A one line summary of each proposal is difficult to create, however after taking a quick look, it’s easy to see that each plan contains desirable and less alluring elements.  The least attractive suggestions include providing room for RVs (hopefully this doesn’t mean they’re trying to turn it into a trailer park), and a “crystal concourse” (sounds both expensive, and a bit too much like Superman’s fotress of solitude).  Other more appealing features include additional trees and greenspace, a community garden, skateboard park, off-the-leash dog park, and paths for jogging and cross country skiing.

Also included in a variety of the plans is structure for the Fall Fair that could accommodate livestock, flea markets and related displays.  However, as mentioned above the organizers have a problem with some of these proposed elements, specifically the exclusion of a perimetre fence.  As the current fence around the M-Centre is rusty and in need of replacement, it makes sense to tear it down.  Further, if the City is going for an open concept, a fenced in border would not be a wise choice.  Have the organizers of the Fall Fair ever heard of Modu-Loc?  It seemed to work well when RMC fenced off the College for the Tragically Hip concert a few years back.

In the end what do you want the Memorial Centre to be?  Have your say, and check out the meeting on the 9th.