Kingstonist is all about getting the community talking about anything and everything Kingston related.  Our Community Soapbox offers an opportunity for readers to air their opinions, grievances and praise about the topic of their choice.  The possible addition of a casino to Kingston has been, and continues to be, a hot topic here on Kingstonist, at City Council and in coffee shops all over town.  Today we feature a Community Soapbox written by Mayor Mark Gerretsen addressing concerns about the casino and the process involved in making this big decision.
—————————— 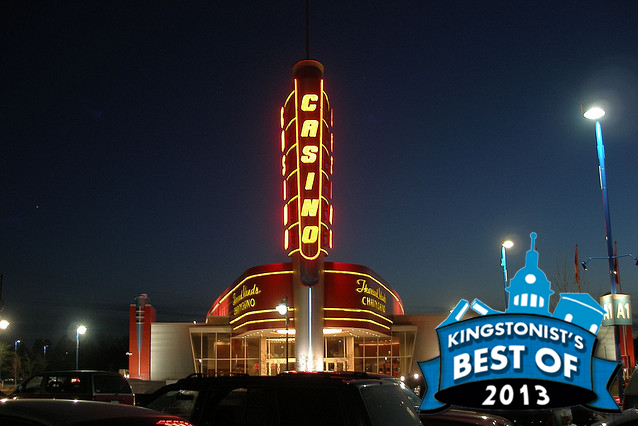 Recently there has been a lot of discussion around a possible gaming facility and a referendum in Kingston. I want to take this opportunity to speak directly to residents about my views and our collective challenges and opportunities.

I want to first apologize for my recent comments on social media around the issue of the referendum and to the councillors who are bringing this motion forward. It was never my intention to offend anyone but rather to flag our competing priorities as a council. Knowing what I know now I would have handled things differently.

In October council approved a motion to move forward in the Ontario Lottery and Gaming (OLG) Corporation’s process to explore the possibility of a gaming facility in Kingston. Around the same time other communities like the Towns of Gananoque and Leeds and Thousand Islands also expressed interest. Expressing interest does not mean a casino is a foregone conclusion in any of our communities. It means we’re interested in exploring what the benefits and impacts are. Above all else it means we’re interested in keeping the dialogue open and continuing to communicate with our residents as we move through the process.

As it stands now the next stage is whether or not the OLG presents a proposal to Kingston for a gaming facility. If we are selected as a possible site, then we will begin the discussion with the OLG and our residents about the possible location.

The OLG process has been a complicated one – where communities appear to be set up to compete against one another to host these facilities. Kingston is not alone in this discussion. Communities across Ontario are having similar conversations; Toronto, Collingwood, Barrie to name a few.

What concerns me is the tone our discussion is taking. In December the Towns of Gananoque and Leeds and Thousand Islands hired a Toronto based lobby firm to advocate keeping the casino in their municipalities. The consultant’s strategic approach, as outlined in their report brought to Gananoque Council, included “to…facilitate grassroots opposition to a Kingston casino and prevent a casino from being built in Kingston.”

I understand and respect Gananoque and Leeds for their passion in having the casino remain where it is, because in large part they see the economic benefits in their communities. But rather than focusing their efforts on connecting with decision makers like the OLG and provincial government, their consultants have built a strategy around lobbying locally.

The consultants and the Towns of Gananoque and Leeds are operating under the assumption a facility is a foregone conclusion for Kingston – when it is not. All we, like they, have said is that we’re interested in moving forward in the OLG process.

At the end of the day Gananoque and Leeds have to do what they feel is in the best interest of their residents and if hiring a Toronto based lobby firm is what they need to do then I have to respect that despite my feelings on the approach. As Mayor of Kingston I have the same obligation to advocate for our community and our interests in this process and this discussion will be a Kingston based one.

It’s interesting that the question of a referendum is now in play after we have had significant input from our residents. The city held a public meeting – an open forum for residents to come and voice their opinions – it was packed with people from across the spectrum on this issue. The city conducted our own surveys, both over the phone and online, which showed the city almost evenly split on the issue.

Recognizing the importance of this issue, the city asked the President of the OLG to come and present to council. This is where councillors asked the tough questions on economics, social and health impacts. We have also had formal presentations to council from residents, community groups and associations – speaking for and against a gaming facility in Kingston. Additionally city staff have also done their due-diligence in preparing several reports for council on a broad spectrum of issues from the process, to what the potential environmental, social health and economic impacts could be.

As Mayor, I have to have a holistic view in decision making, taking into account how this decision impacts our priorities. You elected me to see the bigger picture and to chart the course for our community. I am one of 13 voices on council.

Referendums can be effective tools, but are residents and councillors prepared to devote money to this over another priority? The more appropriate time for referendums is typically around elections where municipal councils aren’t incurring the extra costs.

Do we want to try and stay at 2.5%? How are we going to prioritize some of our big ticket infrastructure priorities like the John Counter expansion, the Airport expansion, a new water and sewer plant and let’s not forget the third crossing? Is council prepared to ask staff to find the funds to hold this referendum over some of our other priorities, like investing in discretionary benefits and affordable housing or contributing to our cultural and transportation master plans?

I am not discounting public input and opinion on this important issue but as a council we are responsible for making balanced decisions for residents across our city now and into the future. We owe it to our constituents to make the best use of their tax dollars. As one of 444 municipalities in Ontario we’re not immune to what’s happening at the federal and provincial levels of government. Both governments are focused on fiscal restraint and reining in their deficits. As a result, municipalities like Kingston are being forced to do more with less.

The province has told us there are limited dollars to go around so it’s up to us as a municipality to do our due-diligence and explore options of generating new revenue and investment in our community and a gaming facility is part of that conversation.

Premier Wynne, in her recent Throne Speech committed to open dialogue with communities where gaming facilities, quarries, or green energy projects were possibilities. I look forward to where that conversation goes.

As Chair, I am always willing to talk with and advise councillors wanting to bring motions to council and I certainly appreciate the intent of the motion councillors Hutchison and Neill are bringing forward to Tuesday’s meeting and I look forward to discussing it with them.

Procedurally the motion still needs to be discussed with myself, the clerk and our city solicitor. I look forward to the continued dialogue on this important issue with our community and hope we can come together in this conversation.
__________________

Thanks to julep67 for the picture associated with this post.