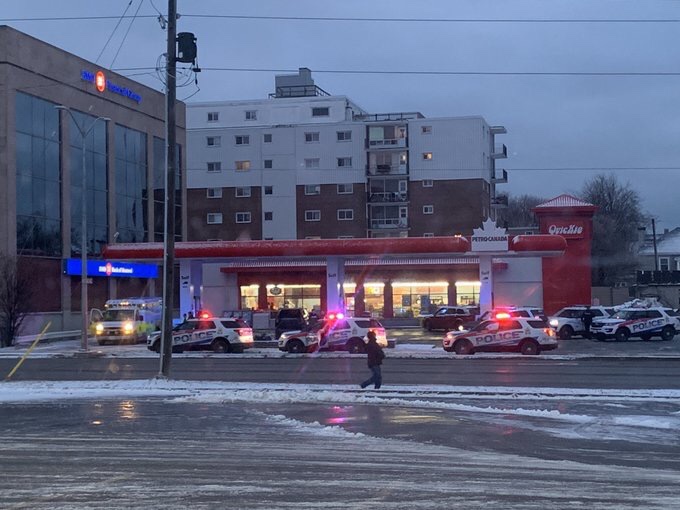 A male was arrested on Sunday night after he was observed walking in the middle of the road while brandishing a machete and a hacksaw.

Kingston Police say Frontenac Paramedics were travelling in the vicinity of Bath Road and Sir John A Macdonald Boulevard at around 4:45 p.m. on the evening of Sunday, Jan. 12 when they came across the male walking in the middle of the roadway with the weapons. According to Kingston Police, the man was observed in a heated argument with another male near the intersection of Van Order Drive and Sir John A Macdonald Boulevard.

“The witness further observed that the accused was aggressively waving around a large machete,” Kingston Police said in a press release on Monday, Jan. 13, 2020.

The witness then followed the accused, who walked toward Bath Road, where he was seen continuing to act irrationally while waving around the machete. The accused man then began to weave in and out of traffic on Bath Road while slamming his backpack against the roadway. The man then opened his backpack and removed a hacksaw.

The passing EMS unit requested Kingston Police assistance and multiple officers responded. The witness activated his emergency lights to control traffic in the area from approaching the man. After the man made his way to the gas station at Bath and Palace Roads, the witness alerted employees at the gas station to lock their door and requested that customers stay in their vehicles out of concerns for their safety. The accused man then continued pacing in front of the gas station while waving around both the machete and the hacksaw.

Police officers arrived and apprehended the male, who was wearing a t-shirt in frigid temperatures while sweating profusely. The man immediately relinquished both the machete and the hacksaw, and was taken into custody without incident.

Kingston Police said the male was being medically assessed and was later taken to Kingston Police headquarters to be held in custody to await a bail hearing on Monday, Jan. 13, 2020.

The 27-year-old local man was charged with possession of weapons dangerous to public peace, and two counts breach probation.

In a statement, Kingston Police thanked their EMS colleagues for their quick identification of and response to the incident.

One thought on “Male arrested on weapons charges”