The municipal election is just a month away, and it’s time once again for election signs to pop up all around the city.

While all elections signs aim to do the same thing, one local candidate’s signs will actually do two: Ashley Johnson, council candidate for the Lakeside District, has worked with an Ontario company to create lawn signs that are actually sandbags, which will be donated to conservation authorities following the election.

“I noticed a lot of people were talking about yard signs, and about single-use plastics, and it’s been something that’s been on my mind,” Johnson said of how he came up with the concept.

“When I saw this sort of controversy, I thought ‘Well, what can we do different?’ So I tried to figure out if there was a different way that we could go about doing something that is traditionally sort of a waste.”

Johnson went through a number of concepts, including cardboard and biodegradable sign idea, however, those ideas proved to be two things: not so great in standing up to weather, and still only single-use items. It was the latter issues that Johnson really wanted to address, he expressed.

“You can only use [those types of signs] once – You’re only using it for that yard sign. I thought a better thing would be if I could use it for the yard sign, and I can also use it for something else… something that has life beyond just being a sign to have my name on it,” he said.

That’s when the idea of using sandbags as signs came to Johnson, and, after doing some research, he found Lloyd Bag Company, a bag manufacturing company based out of Chatham, Ont.

“They’re a huge supplier for sandbags for all over Ontario and Canada, in fact they supply pretty much every type of bag you could ever think of,” he said.

“But they also do their own printing, in house. They’re a small business, and they basically do everything.”

Johnson contacted the company, pitched the idea, and spent approximately one month designing and tweaking the prototype. When he was happy with the general appearance of the sign/bag, he placed his order. Just a few days before the official beginning of the allotted time to display campaign signs in Kingston, Johnson’s signs arrived. And he is quite pleased with the final product.

“I think that when it comes to the end result that I’ve gotten from the bag itself, it’s been fantastic. You would not be able, upon a glance, tell it from any other type of yard sign,” he said, noting that Lloyd Bag Co. was great to work with, and that he hopes it’s a concept that will catch on among other politicians.

“I think it’s an important part of looking at how we should look at using plastics in the future: If we are going to use them, we should use them smartly, not just single use, but things that can be used over and over again.”

“I knew I’d like to keep them in the community, and there was a huge need there, so I thought it was great, being able to help out some of our neighbours, too,” Johnson said, noting that, although the sandbags were slightly more expensive than traditional election signs, the expense is worth it to him in the long run.

“If I can spend a little bit more money, but it goes towards something that is going to be reused, and is ecologically friendly, yeah, that makes sense to me.” 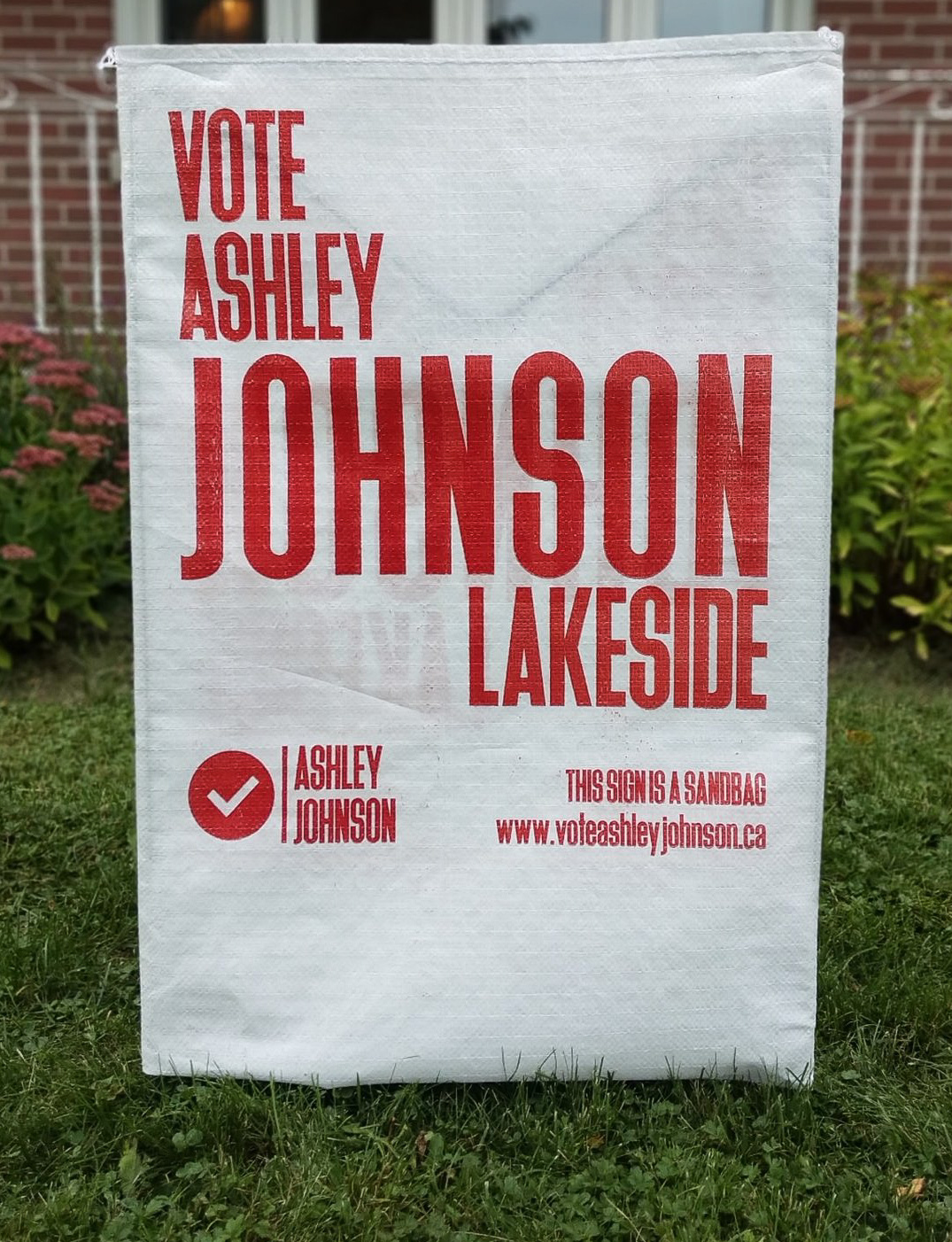