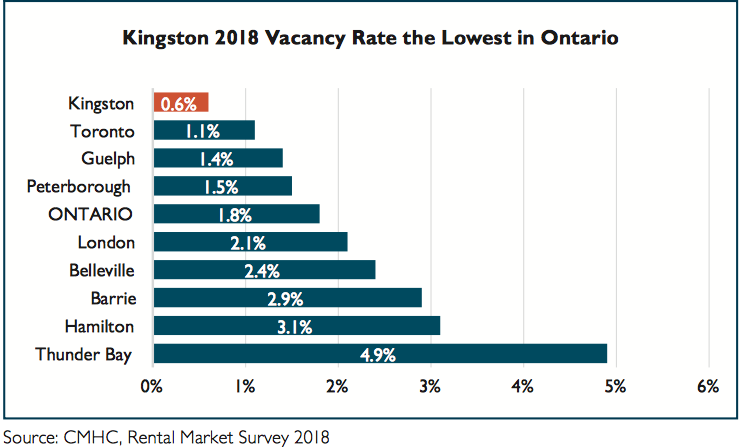 Kingston’s vacancy rate is the lowest in Ontario, at a record low 0.6%

The Canada Mortgage and Housing Corporation has confirmed what many struggling with finding a home to rent in Kingston already know – it’s virtually impossible to find a rental home in the city. According to CMHC, Kingston’s vacancy rate is the lowest in Ontario for the second year in a row, and has reached a record low of 0.6%.

CMHC says that after significant tightening in rental market conditions in 2017, the vacancy rate in the Kingston area declined even further to 0.6% from 0.7% a year ago, as demand for rental accommodations continued to increase more than supply. According to the CMHC report, the vacancy rate fell for the third consecutive year, reaching its lowest level since 1989.

Kingston has a history of relatively tight rental market conditions, says CMHC. Its 10-year average vacancy rate sits at 1.6%, compared to Ontario’s 2.4%. For the second year in a row, Kingston recorded the lowest vacancy rate among all 16 tracked metropolitan areas across Ontario. In fact, says, CMHC, the number of vacant units would need to increase almost three times based on their 2018 number to bring the purpose-built apartment vacancy rate back to its 10-year average of 1.6%.

CMHC says that among all of the city’s districts, Northern Kingston (Rideau Heights, Grenville/ Hillendale, Kingscourt and Strathcona Park) registered the lowest vacancy rate. The vacancy rate in this district decreased for the third consecutive year to an all-time low of 0.4% and was the lowest among all submarkets. During the last three years, only 17 units or 7% of the total new additions occurred in this particular zone, said CMHC.

CMHC says that post-secondary students, recent immigrants and prospective first-time buyers who have been shut out of the real estate market made up most of the increase in demand for rental housing. According to preliminary data from Immigration, Refugees and Citizenship Canada (IRCC) the number of permanent residents coming to Kingston from other countries in the first eight months of 2018 was up by  20% relative to the same period a year ago. Census results consistently show the vast majority of recent immigrants live in rental housing when they first arrive in Canada.

In addition, CMHC says that rising borrowing costs without a similar rise in earnings have reduced the purchasing power of some prospective borrowers, mostly first-time buyers. The first-time buyer group was less active in the resale market, which is reflected in this year’s decline in sales by 11%, and by the drop in the sales-to-new listings ratio. Those who continued renting have supported demand for rental accommodations.

New rental supply is coming to the market at a slower rate than a few years ago, says CMHC. With 29 purpose-built rental apartment completions in the city this year, the net increase in the rental universe dropped to its lowest level since 2012. At 74 units, the growth in purpose-built rental apartments this year was 55% lower than the 166-unit increase in 2017 and 71% lower than in 2016. Between July 2017 and June 2018, there were no completions of condominium apartments or condominium rows, a portion of which could have been offered as rental units supplementing rental supply.

In August 2018, after the 2018 Rental Market Survey cut-off date, 184 purpose-built rental apartments were completed, which CMHC says ultimately has increased the rental supply in the region and will be reflected in the 2019 universe. Moreover, as of November 2018, there were 330 rental apartments under construction (matching the 5-year average), meaning that in the latter part of 2019 and into 2020 there will be a greater number of newly completed units added to the existing rental stock alleviating some of the downward pressure on supply seen this year.

Canada Mortgage and Housing Corporation conducts the Rental Market Survey every year in October to estimate the relative strengths in the rental market. The survey is conducted on a sample basis in all urban areas with populations of 10,000 and more. The survey targets only privately initiated structures with at least three rental units, which have been on the market for at least three months. The survey collects market rent levels, availability, turnover and vacancy unit data for all sampled structures. The survey is conducted by a combination of telephone interviews and site visits, and information is obtained from the owner, manager, or building superintendent.