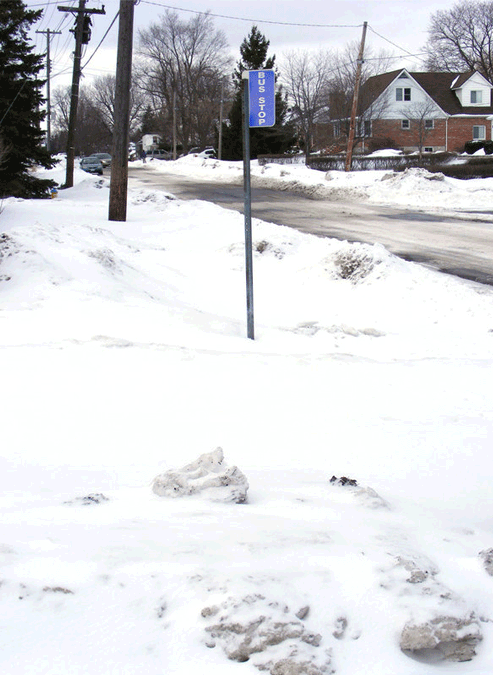 Kingston Transit recently announced that it was awarded $1.2 million by the provincial government and that it has plans to use this money to improve service.

My first reaction: “Hallelujah for that!”

As a monthly pass holder who has been thoroughly disappointed in bus service this winter, this came as welcome news. During the month of February I did not have the pleasure of successfully catching the 4:15 bus home from work even one time. I wanted to catch it. I got there on time. I waited for it.. and waited, and waited… Every night, after a long day of work, I trudged through snowbanks, slid along slippery sidewalks and stood in place at the bus stop in frigid temperatures and howling winds only to be left there – stranded by Kingston’s bus system. Most days I was saved by a friend who drove past and spotted me, perched frozen atop a three foot snowbank, at the bus stop. Some days I simply had to walk home, cursing under my breath. But on no occasion did I even see a bus headed west, let alone catch one.

I am certain that I am not the only bus rider in Kingston who has this story to tell.

What surprised me most about this situation was that it occurred along one of our city’s busiest routes – two different buses running two different schedules are supposed to traverse that stretch of Union Street. In response to my nightly complaints to Kingston Transit, the manager confirmed to me that this was, indeed, the best serviced area of the city. His comments weren’t inspiring, instead I was simply left to wonder how poor the service might be in other areas and ponder how, in the face of this utter unreliability, Kingston Transit even remains in business.

With the announcement of the $1.2 million cash infusion I thought that these troubles would soon be over. My route – and everyone else’s – might finally benefit from snow-cleared curbs, more buses, plentiful shelters, posted schedules and more frequent service! I eagerly awaited the news of how this huge injection of funds would be spent to move Kingston Transit into the 21st century. As it happens, my wait was in vain – again.

Paula Nichols spoke to CKWS tv to explain that the money would be used to implement a smart-card pay system. You know, the kind of thing where you get to flash a card over a sensor and in an instant you’ve paid your fare? I suppose the idea is to move people out of the doorway and into the crowded aisles faster than ever before. I can see where they’re going with this – it’s hip, it’s now, it’s so au courant. Who could resist riding the bus if they knew they would get to use one of those things? Ms. Nichols goes on to explain that the provincial money is earmarked for Capital Expenses and not Operating Expenses, with the implication that this is the reason that they are stuck using the whole chunk of money for such a frivolous purpose. I might have believed her, too, I might have thrown up my hands in defeat and said “them’s the breaks” if it weren’t for the fact that buses and shelters are clearly under the Capital Expense category. With her excuses, Paula dashed my hopes of ever getting home on the bus.

I’d like to take the bus, I really would. But I’d also like to keep my job, get home before dark, and avoid frost bite. There are lots of good reasons to use public transit – it saves gas, it alleviates parking concerns, it’s social… and in this age of raised environmental consciousness (and even tax write-offs for transit users) it seems barbaric not to at least try it. So I did. I didn’t like it.

A smart use of the money would have been to improve the reliability of the bus service – to throw the whole wad into smart cards???? Well that’s just….. dumb.