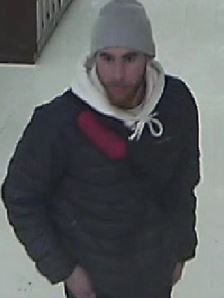 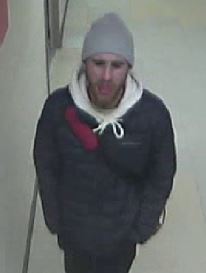 Police have released the above photos and are asking for public assistance in identifying a male suspect involved in causing significant damage at St. Lawrence College.

According to Kingston Police, the male suspect entered St. Lawrence College at approximately 8:40 p.m. on Friday, Mar. 8, 2019. The male was observed on security video entering numerous classrooms, before he proceed to damage a vending machine, as well as multiple windows and doors.

The suspect is described as a Caucasian male, 20 to 30 years of age, stand between 6’ and 6’4”. The suspect has a slim-to-medium build, brown or red facial hair, and a partial beard. At the time, the suspect was wearing a black coat, black jeans, blue Nike shoes with white soles, a grey hoodie, and a grey toque.