Editor’s note: The term ‘SWATing’ refers to the tactic of deceiving emergency services into sending responders to another person’s address, or falsely reporting a serious emergency.

There were many questions posed, but few of them answered at a press conference regarding the UK youth who was allegedly behind the threats leveled towards local schools in December of 2018.

The press conference took place at Kingston Police Headquarters on Thursday, Jan. 31, 2019 at 2 p.m. Two members of Kingston Police, Det. Sgt. Jay Finn and Det. Const. Paul Robb, were joined by two representatives from local school boards, Scot Gillam, Associate Superintendent of Education for the Limestone District School Board, and Theresa Kennedy, Superintendent for the Algonquin Lakeshore Catholic District School Board. Following Finn’s reading of a formal statement from Kingston Police, the conference was opened up to members of the press. Here’s what was learned:

Kingston Police had already identified the youth by the end of the day on Wednesday, Dec. 5, 2018, the first day area schools were put on lockdown and/or hold and secure due to threats made over the phone indicating there were people at the schools attempting to attack students, according to Robb. Robb explained that there were few other facts he could divulge regarding when and how Kingston Police were able to identify the youth responsible.

The only piece of information given regarding the youth was that he is a male. His age was not given (though, the fact he is classified as a ‘youth’ means he is under the age of 18), nor were Kingston Police able to say in what part of the United Kingdom the youth resides. Police could also not confirm whether or not the youth is currently in custody, due to the ongoing investigation in the UK.

Kingston Police did say their portion of the investigation is finished.

As was indicated in the statement Kingston Police released prior to the press conference, police confirmed the 14 charges they are seeking to lay on the youth via an arrest warrant will not come to fruition unless the youth enters Canada. They did say, however, that they expect the youth to face some sort of legal repercussion for the SWATing incidents in Kingston.

“I think we’ve provided the United Kingdom with information and certainly grounds for them to action what occurred here in Kingston in December. I wouldn’t say that nothing is going to happen to this individual as a result of what happened here, and I wouldn’t agree with the earlier statement that we couldn’t do anything about this… This person caused these lockdowns and we did take action, but we just have to rely on other law enforcement agencies to assist us in taking that action,” said Robb, noting that the law enforcement agencies Kingston Police contacted in the UK “responded immediately.”

“I think they have a charge called ‘malicious communication’ and that’s the charge that kind of fits the set of circumstances that occurred,” he said. 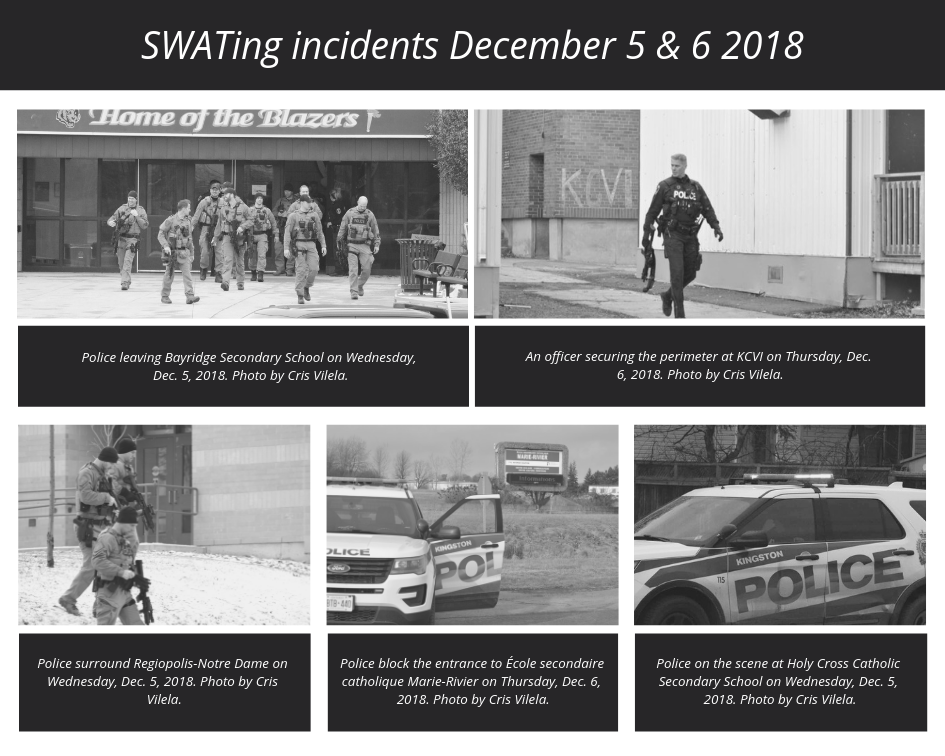 When asked how it was possible for the second day of schools SWATings to occur if action was taken immediately, Robb pointed to the need for due process.

Police also indicated that, even after the suspect becomes an adult, he will still face the charges Kingston Police are looking to press, should he enter Canada.

Police would not speak to a possible motive, nor would they confirm or deny whether the youth was connected to the Twitter account that immediately began to take credit for the SWATings. At first, they would not confirm whether or not the suspected youth had been in contact with someone in Kingston prior to or during the SWATing incidents. They did, however, eventually agree to define the Kingston connection as “interactions online with people from Kingston.”

“I’d agree with that, yep,” said Robb when asked if those online interactions were what led to the SWATings. He would not say whether the interactions took place over social media or via an online gaming program.

“You have to keep in mind that that type of information might identify witnesses that are part of the investigation, and those witnesses themselves could be young people, so we can’t do anything to identify young people, it would be seen as prejudicial,” Robb said.

Kingstonist obtained screenshots of dialogue between the suspect and an individual from Kingston. In an effort to ensure the parties are not identified, the screenshot has been censored. 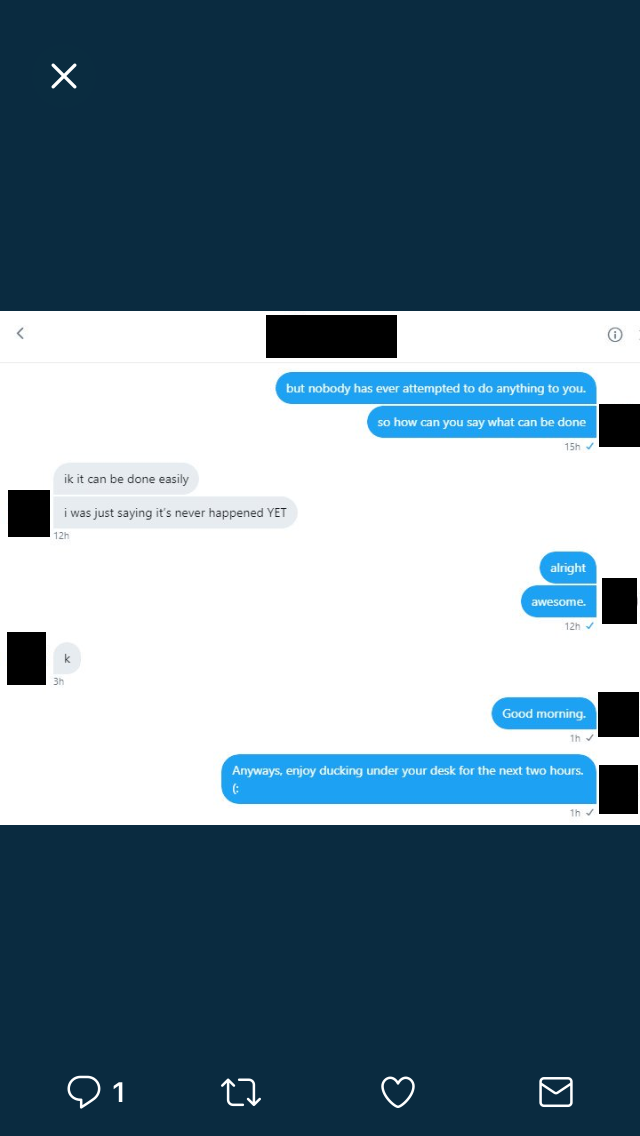 “But nobody has ever attempted to do anything to you,” the party believed to be the youth in question said.

“So how can you say what can be done?”

“[I know] it can be done easily,” responds the individual from Kingston.

“I was just saying it’s never happened YET.”

“Alright,” and then “Awesome,” the suspect said.

The following day, the individual in Kingston responded “K.”

A couple of hours later, the suspect sent another two messages to the individual in Kingston, and ones that indicate what the pair were speaking about.

“Anyways, enjoy ducking under your desk for the next two hours.”

Although the suspect was miles and miles away, and had no one carrying out the threatened attacks on the schools, police indicated that there was still a threat to the schools during the SWATing incidents.

“What this person has done is they’ve called in to say people are at schools attempting to attack students at the school. While that didn’t actually occur in real life, certainly this person’s actions may have caused someone else, or could have encouraged someone else to commit those type of offences,” said Robb.

When asked about the frustration they faced as law enforcers during the investigation, Robb expressed that the world is a different place than it was even a decade ago.

“With social media and the digital world now, the world is a much smaller place where people can commit offences across borders, and it’s very challenging for law enforcement because we have no legal standing, no legal authority to arrest someone in the United Kingdom for these offences,” he said.

All parties expressed satisfaction with the protocol in place for dealing with situations like the school SWATings, and thanked one another for working together so well during such a stressful situation.

“I can just say that we always put the safety of our students as our number one priority, and so we’re just really proud of how all of our communities worked with Kingston Police to ensure that safety and followed all of our procedures efficiently and during a very challenging time, so I am very proud of how our community – both Limestone District School Board and ourselves – and thank you Kingston Police for all of your support,” said Kennedy.

“Yeah, nobody wants to go through the process of having schools go into a lockdown, or a hold and secure, they’re quite stressful for students and staff and families, but I would reiterate what Theresa said, that our working with Kingston Police was absolutely fantastic and at no time were we in any sort of danger, but we sure appreciated the support and the quick response of Kingston Police,” agreed Gillam.

Kingston Police could not speak to the investigations into the incidents at the schools outside of the City of Kingston, and indicated that the Ontario Provincial Police are still investigating.

Kingstonist will continue to monitor the legal situation and provide updates as they become available.

Original coverage of the threats to area schools here:

The video footage of the entire press conference is available here.

With files from Cris Vilela.