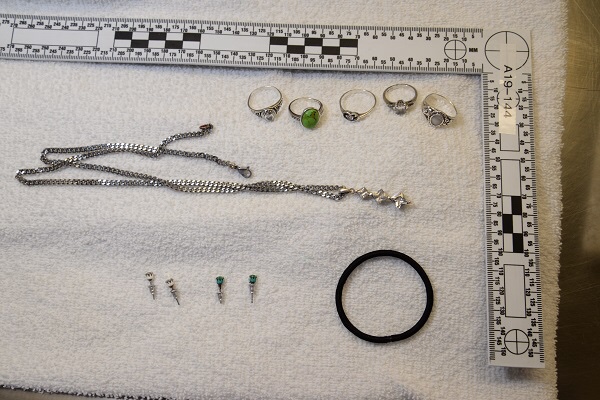 UPDATE (Thursday, Apr. 25, 2019): Kingston Police have confirmed the identity of the deceased woman. Thanks to all who shared.

Kingston Police are assisting the Regional Coroner’s office in relation to a sudden death, and are asking for public assistance in efforts to identify a female deceased party.

On Sunday Apr., 21, 2019, two parties were found deceased on a sailboat near Belle Park. The deaths do not appear to be criminally suspicious, however the coroner’s investigation is ongoing. Conventional methods to identify this female have been unsuccessful.

In efforts to identify the female party, police have released the following descriptors, as well as the above photo of the jewelry she was found wearing, and are asking the public to review both.

The Female is described as: white, dark shoulder length hair, approximate age of 40 to 50 years old, approximately 5’2”, and of medium build. She was missing several teeth. She had several tattoos that included, but were not limited to:

– “FAITH” on the back of her neck/upper back

– a skull with a rose covering her right forearm

– two bands of hearts that wrap around her left bicep

– small heart with initials P.W. within it on right shoulder

Anyone with information, please contact Detective Veltman at 613-549-4660 ext. 6300 or via email at [email protected] or any other member of the Major Crime Unit.

You can also provide tips anonymously by calling our general number 613-549-4660 ext. 0 and asking to remain anonymous.