The closure of Kingston Penitentiary was met with guarded concern regarding the impact on the local economy, as well as watchful concern regarding what might become of Canada’s oldest continuously used prison.  Soon after the last cells at KP were vacated, Kingstonians were offered a glimpse of its future potential as a viable tourist magnet thanks to tours offered in support of the local United Way.  Tickets to peek inside Kingston Pen sold out almost instantaneously, attracting curious spectators from all across Canada.  Re-sellers were quick to take advantage of the unprecedented demand, selling tickets for 3-4 times the asking price.  This trend continued when Habitat for Humanity took their turn fundraising via tours of KP.  Nevertheless, this did little to curb developers from pitching their grand visions for what might become of Kingston’s massive waterfront gem.  As we move forward, tax payers may not have have much say in Kingston Penitentiary’s eventual transformation, nor the degree to which the facilities are preserved as an Alcatraz-styled tourist attraction.
—————————— 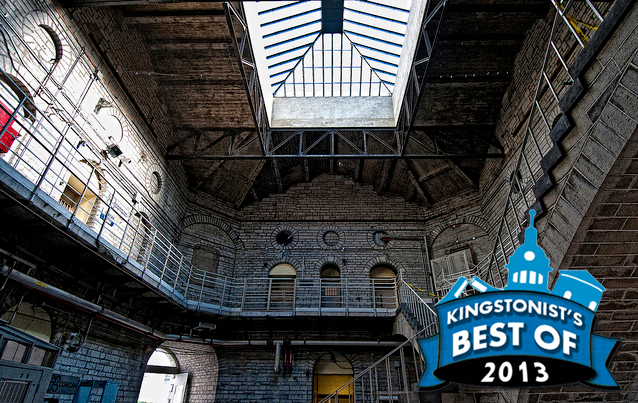 First came the controversial news that Kingston Penitentiary would close. Then came the widespread speculation regarding what would become of the former home of Canada’s most dangerous offenders. Soon thereafter, curious citizens were tempted by a unique, one-time only opportunity, to catch a glimpse behind the storied walls of Kingston’s legendary 178-year old penitentiary. The initial offering was conducted in support of the city’s United Way campaign, while it went on to raise approximately $150,000 in donations that will be put to good use by local community programs, charities and the like. Much to the delight of event organizers, the initial, generous block of 7,000 tickets sold out in less than 48 hours. What came later was even more shocking, as an additional allotment of 2,400 tickets vanished in under half an hour.

It did kind of throw us a bit, because we weren’t anticipating this kind of demand….This was a fundraiser for a charity, and we hope respect that – Bhavana Varma, United Way KFL&A President and CEO

Online community classified sites were buzzing with people in search for tickets, as well as people suspiciously willing to part with theirs. Resellers were reportedly peddling coveted tickets at more than 4 times the sticker price, which is both unfortunate considering the cause these tours were supposed to benefit and promising for those who would like to see KP transformed into an Alcatraz-styled tourist attraction.

Moments after the first 90-minute tours commenced, social media began to swell with images and first-hand accounts from friends, family and acquaintances who were among the lucky few to secure tickets. The photographs offered breathtaking views inside the cells of Canada’s most notorious criminals. Furthermore, they served to ignite demand for more tickets, more tours and more opportunities to crawl around inside of KP.

Shortly thereafter, Habitat for Humanity announced that they would try their hand at offering tours of KP. Learning somewhat from the United Way, their initial allotment of tickets totaled 9000. Unfortunately, before all the tickets had been sold, the feverish demand resulted in the ticket server crashing, leaving many wondering what would come next. Habitat for Humanity was quick to rectify the situation, responding:

We understand the anxiety of those who tried to purchase tickets, but were unable to do so. We sincerely apologize. The difficulties turned what should have been a positive experience into frustration. We couldn’t be happier to have Rogers K-Rock Centre and Ticketmaster selling the remaining tickets on our behalf. Antonietta Mirabelli, VP, Marketing and Communications, Habitat for Humanity Canada

Of course history has a way of repeating itself, and demand for this second bunch of ticket sales was no different that the first. Just over an hour into the sale, and tickets were again sold out. Friendly strangers on Kijiji, Craigslist and eBay sprang into action yet again, selling tickets for more than what you’d pay to go an average NHL game.

Just what have we learned from what has transpired with the initial offering of tours of KP? Demand for tickets has outpaced supply by a wide margin, and that might not slow down for the foreseeable future. While it remains to be seen just how much staying power Kingston’s newest oldest tourist attraction will have, its initial popularity should serve as a definitive sign to those considering redevelopment. Clearly the preservation and historical significance of Kingston Penitentiary should be given due consideration in playing a significant role in the facility’s future.

Thanks to cjh44 for today’s photo, which provides a glimpse inside Kingston Penitentiary’s shop building.