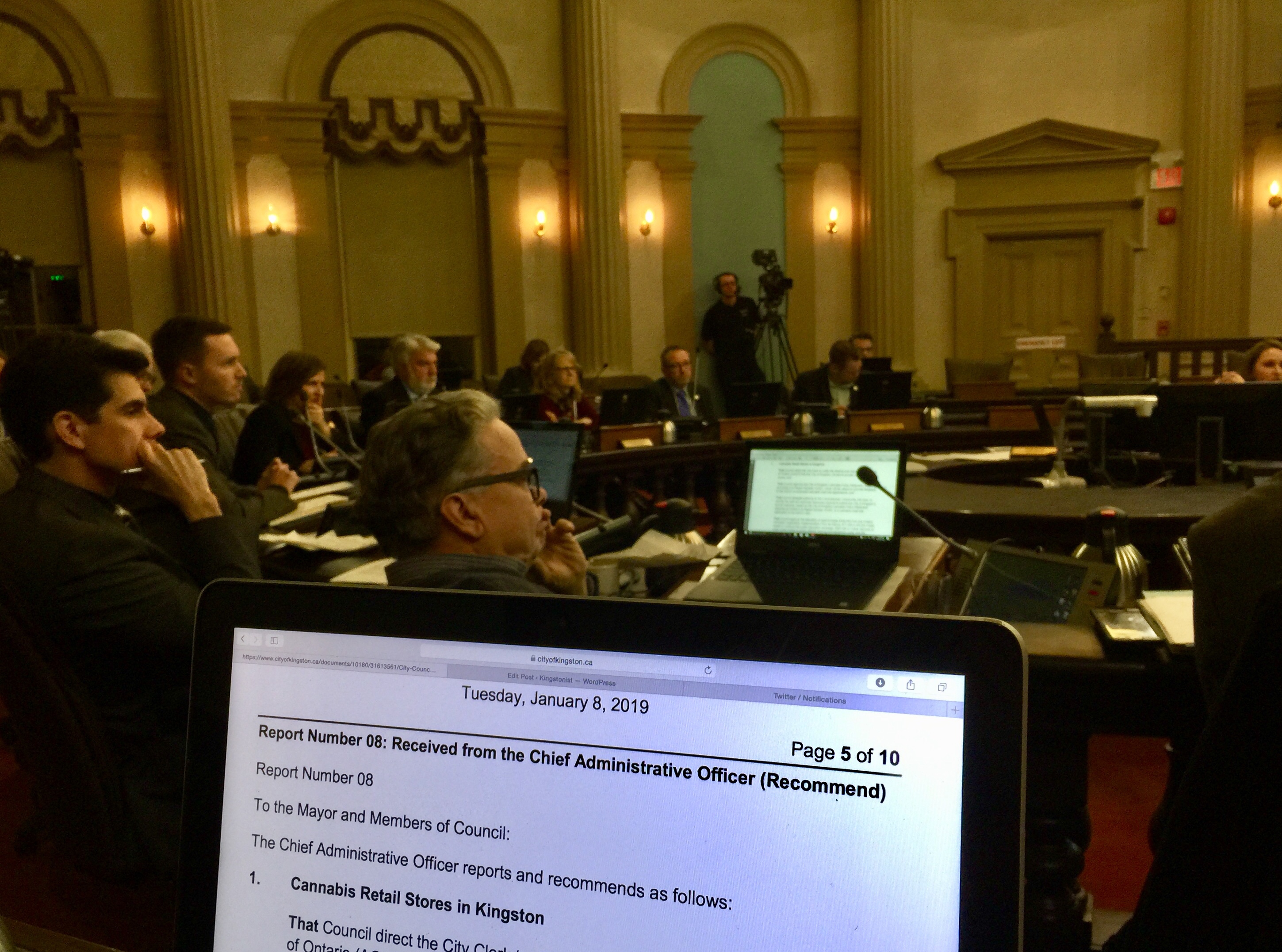 Following the recommendation of the city’s Chief Administrative Officer, city council has unanimously voted to opt in to the opening of cannabis retail stores in the city of Kingston.

Ontario municipalities had been given a deadline of January 22nd by the provincial government to decide whether they would opt in or out.

As part of the vote, council also approved the allocation of approximately $300,000, obtained from the Ontario Cannabis Legalization Implementation Fund, to be used as follows: $77,000 to KFL&A Public Health to continue a public education campaign; $207,000 to Kingston Police Services to cover costs related to the training of approximately 60 Kingston Police officers and policing equipment; and the remaining funds to be held by the City to fund other as-yet unknown costs related to the implementation of cannabis legislation.

Kim Wright, VP of Public Affairs with Hill+Knowlton Strategies, represented cannabis retailer Fire & Flower Cannabis in a presentation to city council prior to the vote. Fire & Flower Cannabis currently has retail stores in Alberta and Saskatchewan, and is hoping to open in Kingston, Wright said. In her presentation, Wright asserted that Fire & Flower’s priority to consumers “is really about having bricks and mortar so they can have have access to safe products, and done in such a way that consumers know what they’re getting.”

“I’m nervous about it…because of the unknown, I guess,” said Councillor Oosterhof in deliberations prior to the vote. “The 150 metres from schools really bothers me,” he said, asking if that can be changed. Commissioner Lanie Hurdle indicated that the separation distance from sensitive areas was a provincially-determined rule and the municipality could not alter it.

Mayor Paterson said he found it very interesting to see the public feedback. “Two things are clear: #1, cannabis is legal, and #2, the majority of Kingston residents are in favour of it.” But, he noted,  “the biggest concern brought up (in the public survey) was exactly what councillor Oosterhof brought up, and that is the proximity issue.”

Paterson moved to amend the report to include a request that the province of Ontario provide the city with the authority to further restrict the location of cannabis retail stores based on proximity to City-identified sensitive uses such as schools, community centres, youth facilities and other cannabis retail stores. That amendment was passed unanimously by council.

Councillor Boehme addressed the consequences of opting out by citing the financial costs of doing so and foregoing participation in the Ontario Cannabis Legalization Implementation Fund in its first year. “By my calculations, that cost is $145,000 that would go to training police and health services…so if we opt out, we’re not really preparing for something that we’ll be forced into in a year anyway. Essentially this is just fiscally prudent to approve this motion.”

Councillor Hill was generally in favour of the motion, he said, while expressing regret that the LCBO was not chosen to administer the program, since they already had the requisite staff, locations and resources to effectively handle a controlled substance. “At the end of the day, it’s going to be a lot safer in our schools, it will go a long way in eliminating those people who deal it in our schools.”