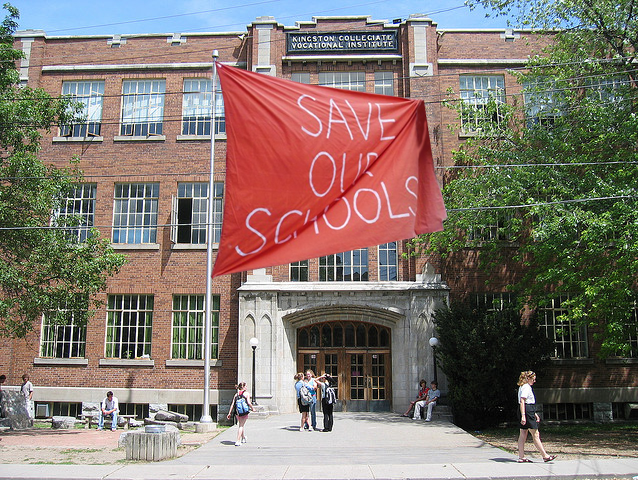 The Kingston community should ‘move on’ and accept the provincial decision to close KCVI and QECVI, says Sophie Kiwala, Liberal candidate for Kingston and the Islands.

Kiwala’s remarks in a recent CFRC radio interview indicate that the candidate has changed her position on the schools issue. Originally a supporter of the Save Our Schools campaign, Kiwala now says that Kingston is ‘fortunate to have the funding come into the riding’ and that ‘the trustees’ decision’ to close KCVI and QECVI ‘should be respected.’

Kiwala’s position is now in line with the very unpopular announcement made by outgoing MPP John Gerretsen last March, in which he confirmed that a new school would be built for $35 million and KC and QE would be closed.

In her CFRC interview, Holland said ‘I don’t like the idea of amalgamating schools,’ pointing to the impact of school closures on the ‘vitality of the downtown’ and the ‘recruitment of families’ to the city. Holland noted that there are ‘other ways of saving money so we don’t have to shut down schools,’ and said of outgoing MPP Gerretsen, that it was ‘not his place’ to make the decision to close schools against the wishes of the community. However, Holland also said of the school board that ‘we should respect the autonomy of that level of government.’

Green candidate Robert Kiley in his interview with CFRC proposed an alternative model to save the three schools, stating that ‘the best approach is to have three sites’ and to instead ‘merge the administration’ of the schools. Kiley also said that the money for the new school should be redirected to enable ‘building retrofits,’ given that school neighbourhoods ‘benefit deeply’ from the schools which provide ‘important social networks for students.’

Progressive Conservative candidate Mark Bain was also interviewed by CFRC, but the interviewer neglected to ask him his position on the school closure issue.

School supporters will continue to press the candidates for a firm commitment to reverse the province’s decision to close city high schools.