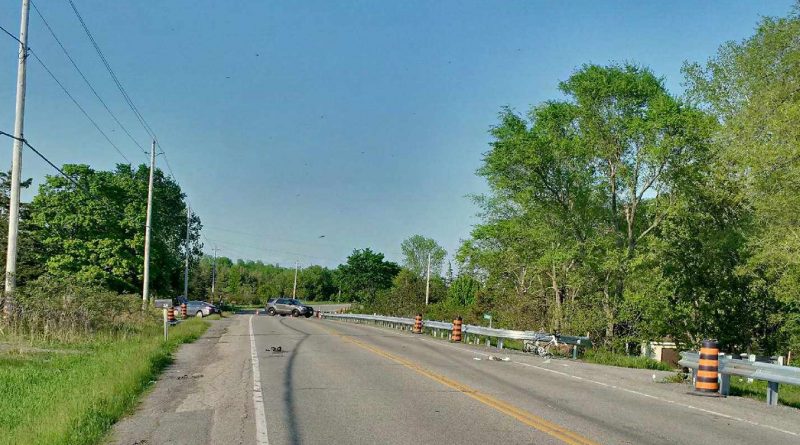 Photo taken following the collision between a vehicle and a group of cyclists in Bath on Sunday, May 27, 2018.

Update and correction: The first version stated that Saunders was also charged with “two counts of driving while his ability was impaired by drugs causing serious bodily harm,” as originally stated by the OPP. The OPP have since updated their press release to clarify that Saunders has not been charged for driving while his ability was impaired by drugs. “This investigation is ongoing and no additional charges have been laid at this time. The OPP apologizes for the error,” the agency said in the updated press release.

The Ontario Provincial Police have arrested and charged a 51-year-old male for the collision between a vehicle and cyclists that occurred between Amherstview and Bath on Sunday, May 27, 2018.

The collision happened on Highway 33 around 3:30 p.m. near Jim Snow Road. Several cyclists were injured, one critically, when the vehicle struck the group of cyclists. The cyclists were part of a charity bike ride called ‘7 Days in May,’ to raise funds for Pancreatic Cancer Canada. The group was on day two of their 1,200 km trek around Lake Ontario.

One of the injured cyclists remains in hospital.

Kingston resident Robert Saunders has been charged with two counts of dangerous operation of a motor vehicle causing bodily harm. He will appear at the Ontario Court of Justice in Napanee on the afternoon of Wednesday, May 30 for bail hearing, according to a release from the OPP.