Continuing to pursue the government’s rationale behind the slated closures of local correctional institutions, Kingston and the Islands MP Ted Hsu made the following statement today:

“The Public Safety Minister has more explaining to do. As part of my investigations into the announced closure of Kingston Penitentiary and Regional Treatment Centre, I went back to look at the government’s own report, ‘A Roadmap to Strengthening Public Security‘.

“This report, commissioned by former Public Safety Minister Stockwell Day for the Correctional Service of Canada Review Panel, has been the government’s ‘roadmap’ for the last few years as it reconstructs the federal corrections system. There is no public document or study more recent on the CSC to indicate any changes in assessment from this 2007 document.

“I discovered that in Appendix F, the report by Deloitte and Touche, Figure 4.5 shows that of the entire 14 maximum-security institutions, the third cheapest to operate and maintain, per inmate, is Kingston Penitentiary. The second cheapest is Regional Treatment Centre.

“Yet the minister chose to close these two institutions over many others that cost taxpayers more money. If the the government’s purpose is really to save money, why not close the most expensive institutions?

This may be only one report, but it is the government’s own report and a significant driver of the majority government’s corrections policy.

Canadian taxpayers as well as the staff of Correctional Services Canada, whose jobs will be disrupted by the closures of Kingston Penitentiary and Regional Treatment Centre, deserve an explanation.” 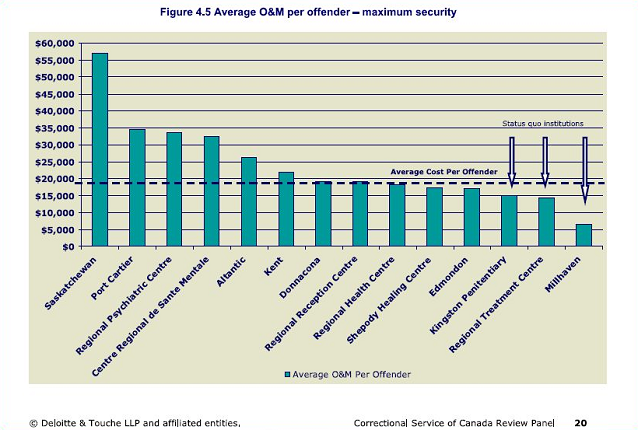 This press release is attributed to and shared on behalf of Ted Hsu (former MP) for the purpose of education and news reporting. The selective redistribution of press releases via Kingstonist.com does not suggest endorsement or approval of the originator. For more information regarding Ted Hsu, visit his website.