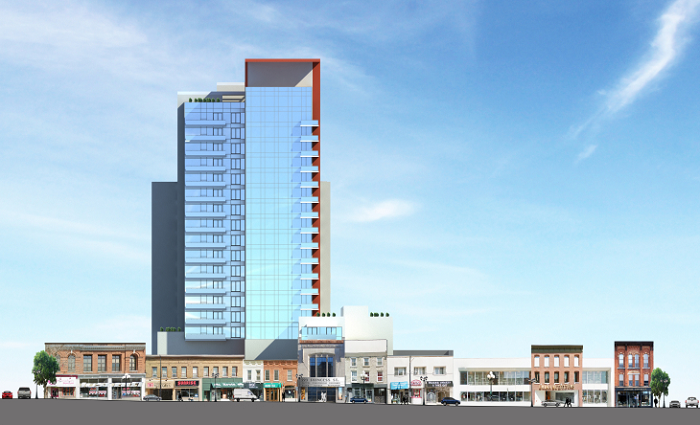 At last week’s meeting, Kingston City Council voted 7-6 in favour of the Capitol Condos, a 16-storey high-rise project above the former Empire Theatre on Princess Street in downtown Kingston. The discussion surrounding the high-rise proposal has been met with both support and objection from Kingstonians. While there is a strong desire to develop Kingston’s downtown, concerned citizens believe that the 16-storey height is too tall and out of character with the surrounding buildings and is not consistent with the City’s Official Plan and zoning bylaws. The outcome of last week’s vote shows that City Councillors are also divided and now there is question of conflict concerning how the vote took place.

When a Council meeting begins, it is standard procedure for councillors to recuse themselves from voting on topics that could potentially hold a pecuniary conflict.  A pecuniary conflict occurs when the councillor or someone in his or her family could potentially benefit financially from the item being discussed. While it was expected to come up at this meeting, Trillium District councillor and real estate agent Adam Candon did not declare a conflict prior to voting in support of IN8’s project, despite promoting the Capitol Condos on his business website. The potential conflict was initially pointed out by The Coalition of Kingston Communities, a group of more than a dozen Kingston organizations who are working together to influence city planning decisions.  Since then, the advertisement was removed and the site has since been declared “Under Construction”.

After consulting with a lawyer, Candon read a statement at council stating that there was no conflict and he intended on participating in the vote. His vote turned out to be a crucial one, tipping the scale in favour of the project. IN8’s President, Darryl Firsten, confirmed that there is no relationship between Candon and his company, however he did acknowledge that as a real estate agent, Candon could help clients access the Capitol Condos when looking for a new home. Since council’s vote, there has been a call for an investigation looking into the matter by an independent integrity commissioner.

Whether you are for or against the Capitol Condo project, how City Council votes are conducted is a crucial part of our democracy, and something that should not be taken lightly.  Accordingly:

Do you think the integrity commissioner should be called in to investigate this matter?

This is an important decision for the city and one that we don’t want to look back on and realize we got wrong.  Now is the time to look into this so we can say whether the vote was legitimate or not so we are not looking back in the years to come realizing a mistake was made. Condo buildings aside, such an investigation would help maintain the integrity of City Council and reinstall the trust that we as citizens put into our councillors to do the right thing.

One thought on “Calls for City to Investigate Conflict of Interest”