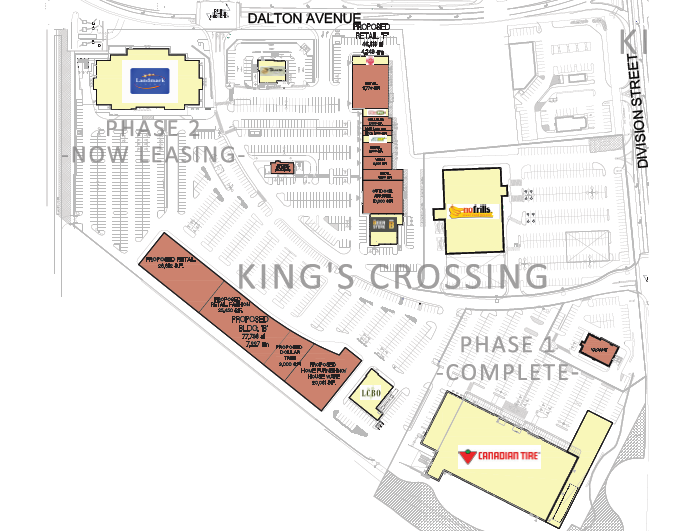 In 2008 King’s Crossing began to tempt shoppers with their factory outlet fashion power center on the north side of Dalton Avenue, while Canadian Tire, No Frills, Empire Theatres and St. Hubert were soon to follow on the southern half of the property.  Save for St. Hubert’s lackluster performance and subsequent closure, there hadn’t been much news to report as the vacant land at King’s Crossing continued to resemble a massive construction site where very little progress was being made.  Since the project was first announced, rumors and wild predictions have swirled regarding which big names might be added to Phase Two. The long list of rumored retailers and restaurants included the likes of Wal-Mart, Ikea, Bed Bath & Beyond, LCBO, Farm Boy, The Beer Store, Mountain Equipment Coop, Yogurty’s, Olive Garden and Good Life.  Some even considered the site a prime location for Kingston’s reluctant and controversial bid for a gaming facility. Although many of these suggestions were simply wishful thinking, failed to manifest or have yet to be finalized a recently updated site plan for Phase Two reveals that some of the previously mentioned businesses were actually spot on.  Accordingly, this poll asks:

Which addition to Phase Two of King's Crossing are you most excited about?

Phase Two of King’s Crossing has arguably been more contentious and drawn out than the first stages of this new expansive commercial district. It first resulted in the relocation of discount grocer, No Frills, from its downtown location on Bagot Street, which left many neighboring residents without access to an affordable grocery store. Of course, downtown also lost one of its last remaining anchor stores when Empire Theatres decided to build a new, state of the art facility rather than renovate their former home at 213 Princess. King’s Crossing has proven to be such an attractive location, that its even lured retailers such as Mexx away from the Gardiners Road big box complex: RioCan.

King’s Crossing has undoubtedly proven to be an attractive destination for businesses hoping to nudge travelers off of the 401 for a quick bite or retail therapy session.  This relatively new facility represents positive growth via jobs, tax revenue, economic spinoff as well as new amenities for an area of the city that has been undeserved for far too long.  Unfortunately, the growth also comes at a price, as the competition with downtown and other areas of the city has had a profound impact that may further shift the balance of where Kingstonians and passers-by spend their money.

Which new additions to phase two are you most excited about? Are you disappointed that one of the previously rumoured businesses hasn’t yet been confirmed? As the final pieces of King’s Crossing are set in place, what additions are you hoping for?