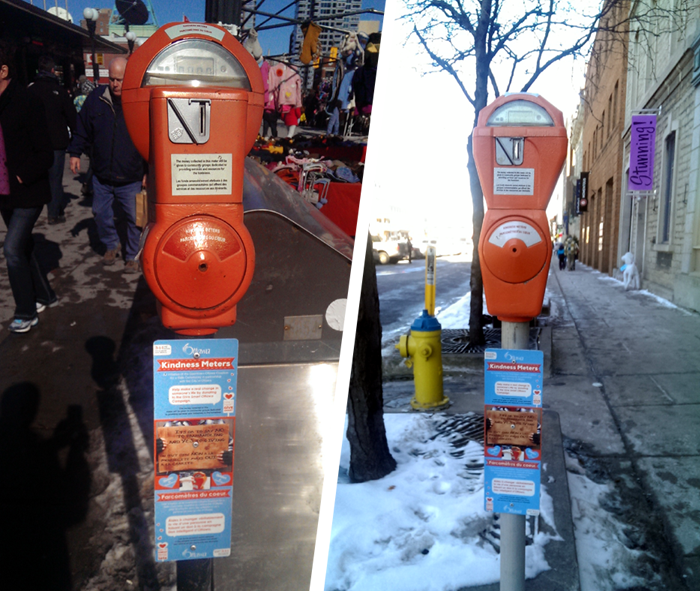 On a recent trip to our nation’s capital, I came across a unique approach to deterring panhandling and collecting donations in support of Ottawa’s homeless population that showed real promise. On various approaches to the city’s historic Byward Market you’ll find orange coloured parking meters prominently placed near garbage and recycling receptacles. Dubbed Kindness Meters, these devices encourage passersby to make a donation to Ottawa’s homeless shelters, rather than give to those actively asking for change in front of local businesses.  Signage posted alongside the 16 Kindness Meters, which have been in place in Ottawa since 2008, introduces their purpose as follows:

The money collected in this meter will be given to community groups dedicated to providing services and resources for the homeless.  Help make a real change in someone’s life by donating to the Give Smart Ottawa Campaign.

The Give Smart Ottawa Campaign further outlines the project as follows:

It’s okay to say NO to panhandling, and YES to giving. Have a Heart – Give Smart is a public outreach campaign managed by the Downtown Ottawa Coalition for a Safe Community (DOCSC) to educate downtown Ottawa residents, employees and visitors about the issue of panhandling. While panhandling is often associated with homelessness, most panhandlers are not homeless. In many cases, giving money directly to panhandlers often supports drug and alcohol addiction and can have a negative impact on the adjacent community.

In light of recent comments and ongoing concerns regarding panhandling along Princess Street, this got me thinking what if Kingston placed Kindness Meters throughout our downtown?

My position regarding giving to panhandlers has changed over the years. I used to be open to giving change here and there, going so far as providing my leftovers after a meal out. The latter practice stopped after one too many people declined the offer of free food, complaining that they couldn’t buy anything with half a gourmet sandwich or a few slices of wood oven pizza.  My cash donations also dried up shortly after I witnessed one of Kingston’s most recognizable panhandlers buying cigarettes and lottery tickets at a neighborhood convenience store.  Since then, I’ve chosen to make my donations through the United Way, which funds various community organizations and resources that aid Kingston’s homeless population. In my mind, this is a safer way to ensure my desire to help actually reaches Kingston’s homeless, rather than enabling a panhandler’s unhealthy habit.

This rationale is in line with Ottawa’s Kindness Meters, which is why I think they could be worth exploring in Kingston.  Granted, the Byward Market still has a few people actively roving the sidewalks asking for change, but the numbers seem to be far fewer than what one might expect in a city as large as Ottawa.  And Ottawa is not alone, as Kindness Meters have been employed in other Canadian cities including Vancouver, Winnipeg and Montreal, generating as much as $700 a week for resources that benefit the homeless.  Realistically these Kindness Meters are not going to stamp out panhandling, nor are they going to solve homelessness. That said, perhaps they can play a role in minimizing undesirable activity throughout our downtown’s quaint business district and otherwise help generate funds that can really make a difference.

What are your thoughts on giving to panhandlers?  Do you think panhandling is a serious enough problem in Kingston that warrants employing something like these Kindness Meters?  Give generously and drop off your comments below.

2 thoughts on “What if Kingston…”