“Washing one’s hands of the conflict between the powerful and the powerless means to side with the powerful, not to be neutral.” – Paulo Freire

Canadian politicians have their knickers in a twist over Israeli Apartheid Week.

Ontario MPPs of all parties voted to condemn the international campus event, decrying its organizers for their so-called “hate speech”.  Liberal leader Michael Ignatieff released an official statement of condemnation in which he claimed that “the activities planned for the week will single out Jewish and Israeli students. They will be made to feel ostracized and even physically threatened in the very place where freedom should be paramount — on a university campus.”

Disingenously, he added that “criticism of Israeli government policy is legitimate,” while “wholesale condemnation of the State of Israel and the Jewish people is not legitimate. Not now, not ever.”

Iggy’s argument would surely surprise many of the Jewish students who attended IAW events at Queen’s this week.  Now in its sixth year, Israeli Apartheid Week is an annual series of events held in cities and campuses around the globe to educate people on the nature of Israeli apartheid and the brutal military occupation of Palestine.  The use of the word “apartheid” draws deliberate parallels to the racist 20th century South African regime, and the minds behind IAW aim to put similar pressure on the Israeli government by launching Boycott, Divestment and Sanctions (BDS) campaigns worldwide.

The 2010 Israeli Apartheid Week in Kingston was organized by the group Solidarity for Palestinian Human Rights.  Events from Monday to Wednesday at Queen’s included lectures on “Transnational Popular Resistance for Palestine”, “Israeli Apartheid: What’s in a Name”, “The Politics of Divestment: Darfur vs. Israel”, and “The Politics of Local and International Solidarity in Palestine”.  On Friday, the Artel hosted the film Slingshot Hip-Hop, a documentary about Palestinian rap music. 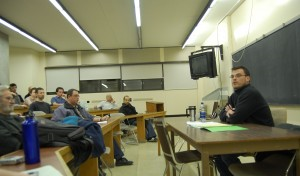 On Thursday night, Canadian freelance journalist Jon Elmer spoke at Macintosh-Corry Hall to a diverse audience and put the spotlight on Canada’s support for Israeli apartheid with his presentation “Ghetto Palestine: Canadian Foreign Policy and the Future of the Israel/Palestine conflict.”

Elmer is a veteran reporter who has long focused on the Middle East, reporting from the West Bank and the Gaza Strip during the al-Aqsa Intifada (2003), after Israel’s disengagement from the Gaza Strip (2005), and during the sanctions period and resultant internal strife (2007).  His work has appeared on Al-Jazeera, and he has covered globalization summits and accompanying protests throughout North America.

Elmer held the audience’s attention well past the two and a half hour time limit.  He had the refreshing veneer of an unrepentant leftist, willing to go beyond the “safe zone” of conventional wisdom in his denunciation of Canada’s imperialist foreign policy.  He challenged NDP candidate Daniel Beals on his party’s lukewarm support for the Palestinian cause and its acquiescence to the Queen’s Park motion condemning Israeli Apartheid Week, as well as chastising the federal NDP for failing on more than three occasions to end Canadian military involvement in Afghanistan.

Beals, for his part, acknowledged a gulf between regional NDP supporters and party leaders, who tend to be more conservative than grassroots activists.  He also said there was a constant intra-party debate on the issue of Israel-Palestine among Jewish NDP members.

Elmer’s presentation was densely-packed with information that could be divided into two broad sections.  In the first part, he described the nature of Israeli apartheid and the worldwide movement against it through the BDS strategy.  In the second part, he explained Canada’s role supporting Israel in what the Goldstone Report described as possible “crimes against humanity”.

Named after UN Human Rights Council president Richard Goldstone – an internationally respected South African jurist and ardent Zionist – the report unequivocally stated that Israel committed war crimes during its 2008-9 attack on the Gaza Strip through collective punishment of Palestinian civilians and the use of white phosphorus in densely-populated areas (the report also accused Palestinian militants of war crimes for their deliberate targeting of Israeli civilians via rockets and mortars).

The Herzliya Conference, sponsored by Israeli think tank the Institute for Policy and Strategy, is the most prominent stage for the articulation of national policy by Israel’s political leaders.  Its most recent report talked about the “delegitimization” of Israel on the world stage following the publication of the Goldstone Report.  Israel also believes that the BDS campaign represents a “strategic threat that could become an existential threat” to the Jewish state.

The term “apartheid”, Elmer stressed, was central to simplifying the terms of the debate.  The BDS tactic helped end South African apartheid after 40 years, even as many Western countries continued to support the racist government there.  The terms of the debate were similar; Nelson Mandela, like Palestinians who resist the Israeli occupation, was also called a “terrorist”.

Ironically, given the controversy surrounding the term “apartheid”, the term was recently used by none other than Israel’s hawkish defence minister Ehud Barak in arguing that Israel’s security would be better served by a peace agreement with the Palestinians.  “As long as in this territory west of the Jordan River there is only one political entity called Israel,” said Barak, “it is going to be either non-Jewish, or non-democratic.

“If this bloc of millions of Palestinians cannot vote, that will be an apartheid state.”

Explaining the pro-Israel consensus of the Canadian political establishment, Elmer suggested that, as with Canada’s war in Afghanistan, foreign policy towards Israel was based less on tangible material resources or imperial conquest and more on the abstract idea of gaining “a seat at the table” in international discussions.

“You can’t really underestimate a seat at the table,” said Elmer.  “When important world decisions are made, if you lay your blood and treasure on the line, particularly in service of American political objectives, you’re going to have a seat at that table and you’re going to be able to participate when contracts are given out or political influence is given out.  And sometimes you don’t get direct political influence over the territory upon which you are intervening.

“I think the Israeli-Palestinian conflict is one of the most visible, longest-running, most politically-significant conflicts in the world.  Whether that’s just or not is a different story, but it’s a reality, and for Canada to participate in that is seen as strategically important to Canadian interests.”

Canada currently has expeditionary forces deployed in 18 different countries.  As Elmer pointed out, these are not all declared combat missions, but often include military “advisors” or attempts to influence elections – traditionally the preserve of CIA-style covert operations, but now openly funded by Western think tanks such as the National Endowment for Democracy, which aim to set up economically compliant pro-Western governments.

The Canadian foreign policy establishment’s cynical attitude towards “democracy” in Palestine was put on display for the world to see after U.S. President George W. Bush pushed for an election there in 2006.  When the results handed a resounding victory to Hamas, rather than the pro-Western Fatah, Canada became the first country not to recognize the new government.  As Defence Minister Peter MacKay said in a revealing statement, “We can’t be said to be following the Americans if we pre-empt them.”

Following the election, members of Fatah, with American and Israeli support, attempted to stage a coup by ousting members of Hamas from the government (detailed in David Rose’s Vanity Fair article “The Gaza Bombshell”).  Hamas regained control of the Gaza Strip in June 2007, yet this defence of a democratically-elected government was itself referred to in mainstream Western media as a “coup”.

Canada has since supported prospective Palestinian strongman Salam Fayyad as the head of an “independent” government backed by Israel and the West.  With an American education in economics and a tenure at the International Monetary Fund, Fayyad is the preferred vehicle for a neoliberal transformation of Palestine.  Elmer compared him unfavourably to Afghan president Hamid Karzai, in that while both are Western puppets, Karzai at least has an Afghan constituency.  Fayyad receives $2 billion in funding annually from Canada, the United States and Europe, and the Canadian International Development Agency has lavishly funded a security force that may have been complicit in vast human rights abuses.

Israeli Foreign Minister and protofascist Avigdor Lieberman, who has suggested requiring Israeli Arabs to take a loyalty oath, has declared that Israel “needs more allies” like Canada.  Indeed, this country’s unquestioning support of Israel may now even exceed that of the United States.  Elmer posited three recent political decisions that help explain Israel’s embrace of the Great White North.

Firstly, Canada backed the postponement of a ceasefire during the 2006 war in Lebanon, allowing Israel to complete its devastation of the country.  Secondly, the country has blockaded Hamas and refuses to accept the legitimacy of the 2006 Palestinian elections that swept the Islamist party to power.  Finally, Canada has been “at the vanguard” in the isolation of Iran – a country which has not attacked any of its neighbours for centuries and has no nuclear weapons, while Israel regularly utilizes military force internally and externally and has an undeclared stockpile of hundreds of nuclear weapons.

Elmer warned about the consequences of Canada’s blind support for a militaristic Israel that flouts international law.

“The political implications of Canada being allied with Israel this closely are legally clear,” said Elmer.  “If Canada is bragging about supporting a security force that’s carrying out widespread human rights abuses, legally in international law before the International Criminal Court, Canada is participating in war crimes.

“If people fund African rebels, the whole world thinks it’s obvious that that’s a war crime,” he continued.  “But when we support Palestinian security forces or Afghan security forces carrying out human rights abuses, or Iraqi forces carrying out human rights abuses, or we’re building prisons in Haiti for a corrupt government to have thousands of political prisoners, or whether we’re arresting suspected Taliban insurgents and bagging their heads and sending them off to Bagram Air Base to be raped and tortured, or off to Guantanamo, these are crimes under international law.

“So when [Junior Foreign Affairs minister] Peter Kent says…an attack on Israel is an attack on Canada, we can throw up our arms and say that’s appalling, or we can actually say that’s pretty useful political fodder for resisting these programs, because the vast majority of people don’t agree with Peter Kent’s statement.  And that gives you an avenue into saying, well, where do we draw the line on our support, and where do Israel’s crimes become our crimes?  Where did the Afghan government’s crimes become our crimes?

“International law is crystal clear on this.”