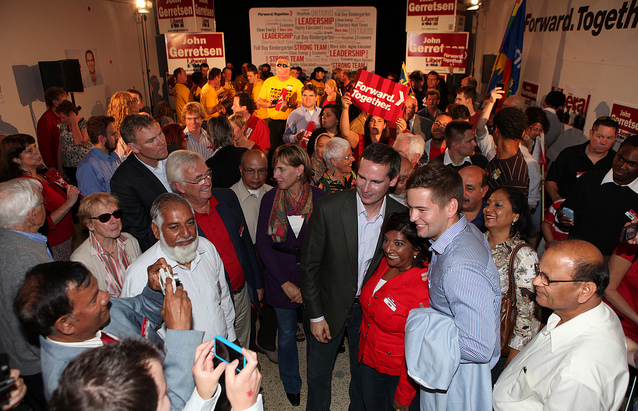 The dust on the 2011 Provincial Election has finally settled, while the incumbent, John Gerretsen, was successful in his bid for a fifth straight term as Kingston’s MPP. The win once again reinforced Kingston’s provincial and federal position as a Liberal stronghold, while the total votes he received were nearly more than those collected by all other candidates combined. Further, his support at the polls doubled that of first runner up, Mary Rita Holland.  The battle for second place was slightly more contested, as a mere 886 votes separated the NDP and PC hopefuls respectively.

If you compare this year’s numbers with those recorded in 2007, Mary Rita Holland and the NDP made the most significant gains (+3.14%), while Gerrestsen’s support was also up slightly (+1.64%) and the same thing goes for the PC’s Rodger James (+0.2%).  On the other hand, the Green Party registered the most significant shift in support as they dropped -5.11% of their supporters between 2007 and 2011.  While that number is significant, it is still eclipsed by Gerretsen’s loss of -13.1% between the 2003 and 2007 trips to the polls.  It will be interesting to see whether or not Mary Rita Holland, Rodger James or Robert Kiley are permitted to take a second kick at the can next time we head to the polls.

During the lead up to this past election, reports from the advance polls indicated that voter turnout across Ontario was up considerably.  However, in the end, Kingston and the Islands had 6,490 fewer voters show up to cast their ballot in comparison to 2007, a mere 44.85% of today’s eligible voters.  Perhaps local candidates and Provincial leaders failed to inspire more people to get out? Or maybe the figures are indicative of fatigue caused by our third trip to the polls in just over a year.

Whatever the case may be, there’s certainly no significant change on the horizon in the Limestone City.  Is that a good thing?  Will four more years of a Liberal rule translate into more jobs, reductions to the cost of living and better access to healthcare and education in Kingston?  Do you think MPP Gerretsen will run again, or is this his last lap around the stadium?  As always, we encourage you to drop off your comments below, and let us know what you think.

Today’s photo is brought to you by and property of the Ontario Liberal Party.