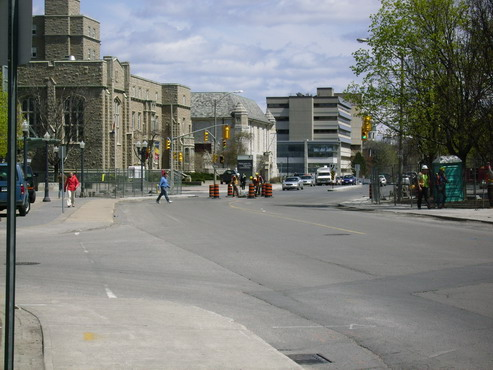 It’s that time of year again – that time when approximately 16,000 students at Queen’s leave for the summer and go back from whence they came. Student meccas like the hub and the corner of Union Street and University Avenue (above) have gone from packed to almost deserted, at least for another four months. So what does it mean for Kingston?

Depending on how you look at it, the lack of students in Kingston in the summer can be a good or a bad thing. On one hand, many of the downtown hot spots are a lot less overrun with students, leaving more room for native Kingstonians to enjoy them. While some bars are universally known as “student hangouts”, there are a several places that are frequented by all ages, and they’ll be a lot less packed over the summer. Of course, all the students from Kingston who study at other colleges or universities throughout the year are back, but it’s probably safe to say that Queen’s students who are here in the fall and winter outnumber those who are coming back from their studies elsewhere.

The downside to the flood of students out of the city is that small business downtown will be seeing a lot less business. Oh sure, Burger King and Pizza Pizza will be able to handle the decline in sales, but it’s the small locally-owned business that are going to suffer. In fact, some places don’t even bother staying open over the summer because students make up the vast majority of their customer base. Stooley’s Cafe at 118 Division Street, for example, only operates from September to April, and even closes during Christmas Holidays and Reading Week when only a few students stay in Kingston.

Restaurants like Stooley’s are a staple of Queen’s life, so you can count on them surviving through the summer, but some other local business are going to have a harder time keeping profits up throughout the summer. I suppose it just goes to show that Queen’s is tied to the community in more ways than you might think… whether that’s a good or bad thing, you’ll have to decide for yourself.