In today’s post in our Best of 2013, Rachelle explores whether or not Kingston is a dog-friendly town.  While we see a large number of dog-friendly places, including some stores in town, we also have parks and other areas that strictly forbid (wo)man’s best friend.  The poll showed a fairly mixed bag of reactions with the largest response being that improvements could certainly be made.  Being nearly a year ago, have things changed at all?  What do you think about our friendliness to dogs?
—————————— 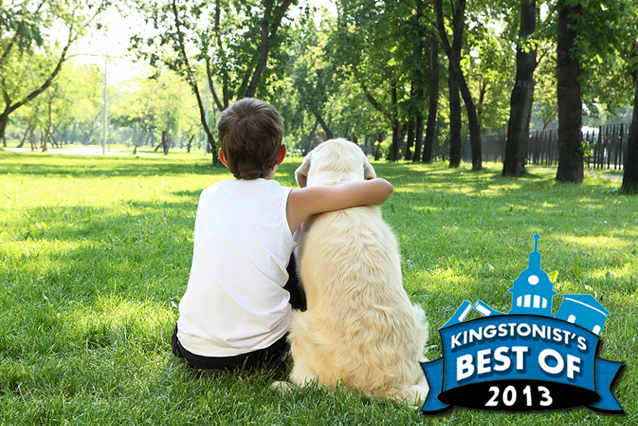 Like people, cities can have distinct personalities. We learn about a city’s character and style through the kinds of communities it builds, the social projects it pursues, the type of economic industry that it dominates, and the variety of events and people it tends to attract. However, one of the most underrated (but surprisingly important) ways to determine a city’s personality is with its policies regarding the presence of pets in public spaces. In particular, that means the cultural attitudes a city’s residents have towards dogs and the nature of animal bylaw conventions upheld by its officials.

With that in mind, this week’s poll asks:

Do you think Kingston is a dog-friendly city?

The answers to how and where and if dogs should occupy public space can vary widely from city to city, which makes sense. It is a quality of life issue that people frequently have strong feelings about. To me, Kingston seems like a bit of a mixed bag.

In some ways, our city can be quite welcoming to dogs and dog owners: there are a few shops in the west end and the downtown core that allow dogs inside; our city is full of beautiful parks that are perfect for playtime; and in many neighborhoods it’s common to see Kingstonians enjoying a walk accompanied by their four-legged friends. There’s even a special Dogs of Kingston page on Facebook dedicated to celebrating the city’s pooches.

But on the other hand, it can also be difficult to have a dog in Kingston: many of those aforementioned beautiful parks completely forbid dogs or limit their use segregated areas and on-leash zones; it’s not strange to see people distinctly go out of their way to avoid contact with dogs on the sidewalk and treat them like a threat, even when those dogs are calm and well-behaved; and it can be challenging to find rental accommodations that accept dogs, despite the fact that any “no pets” clause on lease agreements is void (and in fact, illegal) under the Ontario Tenancy Act.

What have your experiences been with levels of dog-friendliness in Kingston? Should Kingston’s relationships with dogs and dog owners be more inclusive or less inclusive? What would you like to see change–or remain the same–about the way we manage the presence of pets in Kingston’s public spaces?