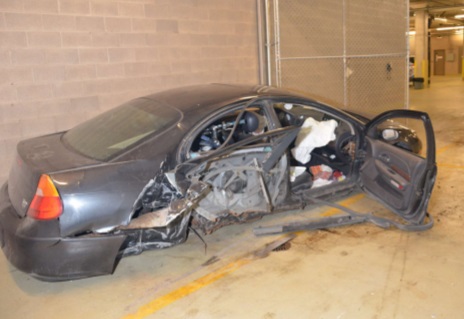 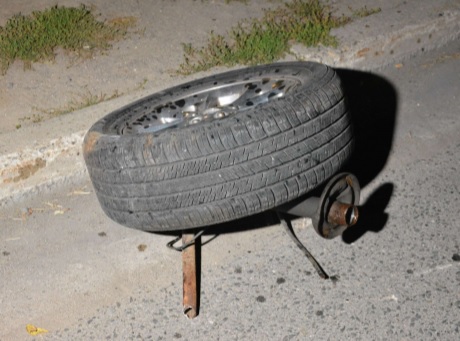 UPDATE (Tuesday, Mar. 6, 2019): The Kingston Police officer who “manoeuvered the patrol car in front of the accused man to block his path” has since been charged by the Special Investigations Unit (SIU). See that story here.

A 39-year-old local man has been arrested after his impaired driving led to a series of unusual events in central Kingston in the early morning.

At approximately 1:15 a.m. on Wednesday, Sept. 19, 2018, the man was driving on Concession Street when he struck a light post at Leroy Grant Drive. The crash caused a wheel on the passenger’s side of the car to come off, and severely damaged the car, but the man continued driving on three wheels as witnesses who heard the collision called police.

According to a press release from Kingston Police, local paramedics contacted police when they discovered the accused man’s car broken down in the area of Sir John A. Macdonald Boulevard and Johnson Street after another wheel had fallen off. Witnesses there reported that the driver exited the vehicle, retrieved a bicycle from the trunk, and fled the scene.

A patrol officer located the driver riding the bike southbound on Portsmouth Avenue around 1:30 a.m. When the officer directed the man to stop, he refused to do so, and the officer manoeuvered the patrol car in front of the accused man to block his path. The man lost his balance and fell off the bike, and proceeded to resist arrest, fighting with both the arresting officer and the additional responding officers, according to Kingston Police.

When the accused male was finally arrested, he was taken to Kingston Police Headquarters where he provided two breath samples. He was found to have just under two-and-a-half times the legal limit of alcohol in his system.

The man is charged with impaired driving, operating a vehicle with over 80mg of alcohol in his system, and resisting arrest. He was later released with a future court date, and his driver’s license was automatically suspended for 90 days. He will face a one year suspension if convicted. His vehicle, albeit badly damaged, was impounded for seven days, and the accused will be responsible for all associated fees and fines.