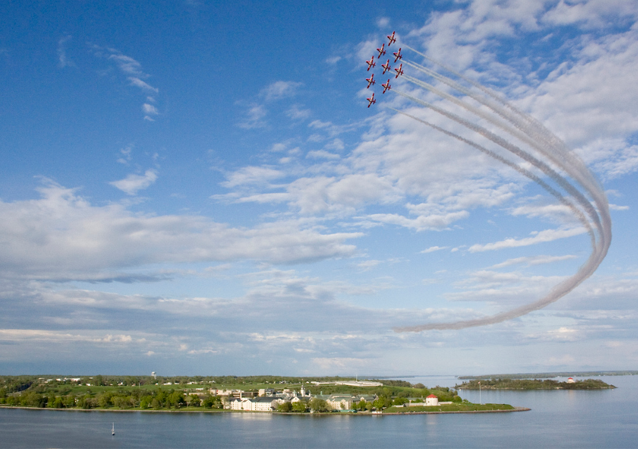 Last Thursday and Friday, the Royal Military College of Canada held their annual Graduation activities, which included Convocation, the Sunset Ceremony as well as the Grad Parade.  Even if you weren’t on campus, the show was hard to miss as it included demonstrations by the Snow Birds, SkyHawks as well as one of the greatest annual fireworks displays in the Limestone City.  Now that RMC’s Grad is complete, the city looks to Queen’s who will be conducting 20 Convocation ceremonies over the coming weeks, as well as St. Lawrence who hosts a handful of ceremonies at the K-Rock Centre.

While many graduating students likely packed up last month, simply returning for their respective Convocation date, many of us are getting ready to bid farewell to friends and classmates one last time.  Convocation is definitely a bittersweet milestone, not only for Grads, but also for Kingstonians.  For permanent residents, unless you plan ahead and make dinner reservations at your favourite restaurant over the next few weeks, you’ll be out of luck as a result of all the parents and Grads dining out post-Convocation.  Conversely, when the pageantry is all said and done, business owners and taxi drivers will experience the annual dip in sales, or at least until tourism season ramps up.  Oh the joys of being a city that’s reliant on three post-secondary institutions.

As someone who remained a resident of the Limestone City after Grad, I’ve grown to enjoy the decreased number of students out and about during the summer.  Whether it’s ability to easily get a seat on the patio, or go to the movies with people who aren’t hooting throughout a screening, I’ll take full advantage of the calm and quiet before the storm.  You may disagree, but remember in 13 weeks time we’ll have a surge of over-spirited frosh chanting on every street corner, and eating there way through our supermarkets and watering holes.

Special thank to J.A.G. for today’s accompanying photo, sourced from our very own Flickr pool.