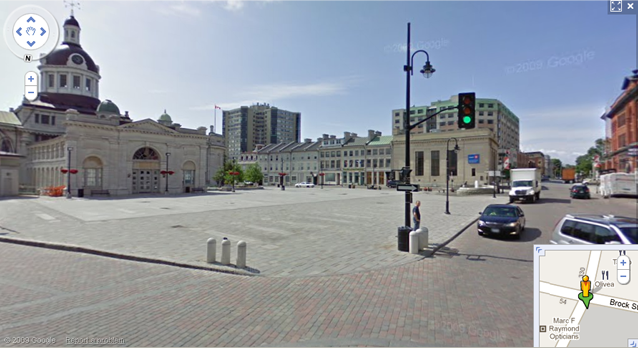 Last July, numerous Kingstonians reported sightings of a strange looking vehicle, that was spotted combing the streets of the Limestone City. What made this automobile stand out from the rest, was its roof-mounted camera array, which was capturing voyeuristic imagery of Kingston’s city streets. For those who may have missed this story, the vehicle belonged to Google, while it was sent to the Limestone City to expand the reach of their highly addictive Street View application.  Six months later, I am happy to report that Street View has finally arrived in Kingston.

The feature provides users 360° horizontal and 290° vertical panoramic street level views within Google Maps. Google collects these images using special cameras and equipment that capture and match images to a specific location using GPS devices. Once the images are captured, they are “sewn” together to create a 360° panorama. Faces and license plates are blurred before the panorama images are served and become viewable in Google Maps.

As was the case when Street View arrived in New York City, Toronto, and every other city, there tends to be way more interesting scenes to look at than your house.  Streetspotting, aka the art of finding funny, illegal and otherwise broken scenes on Street View, has pointed out everything from girls sunbathing, to people doing drugs in alleyways and even two-headed humans.  It will take some time before we’ve had an opportunity to go for a virtual drive down each and every street in Kingston, and take note of the good, the bad, and the funny.  If you notice something, please be sure to share it by way commenting on this post.

Thankfully I wasn’t strutting around my yard naked the day Google drove by.  That all to say, I can fully appreciate the privacy concerns many have raised in relation to Street View.  Do blurry faces and liscence plates go far enough?  Or do the possible benefits (education, tourism, business, accessibility) of Google’s free street level imagery outweigh these concerns?