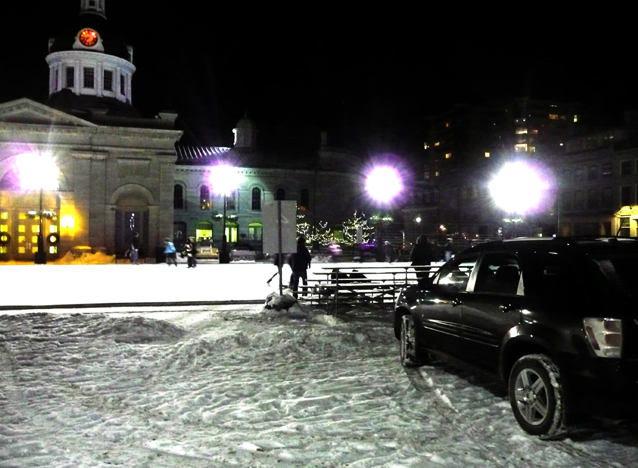 It wasn’t that long ago that Market Square was a parking lot downtown. I’ve only heard the stories — by the time I moved to Kingston, the square was being renovated into the stone structure it is today. I have imagined what it must have looked like all those years ago.

Well, it’s not that hard these days.

Take a drive by Market Square at night, or anytime for that matter, when skaters are buzzing around the artificial rink and you’ll see that Market Square has somehow become Park-it Square. The city usually has problems with people parking illegally on the square in the summer and spring. Cars have been towed off the square for being parked illegally and tickets handed out.

The winter? That hasn’t been a problem until this year. The city’s bylaw officers have noticed it as well and started to ticket those caught parking on Market Square. When I was at the rink the other night for a skate, one worker commented to me about how they had never seen anyone park on the square in the winter until this skating season.

The prime parking conditions, though, raise two issues. The first issue is public safety. The last thing anyone wants to see is people driving around a busy public space, motoring along sidewalks and entering intersections at pedestrian walkways. (Well, maybe there are people that do want to see it. Frankly, I’m in favour of staying safe.)

Damage to the square is another issue. The farmer’s market bylaw states that vendors have to place cardboard or paper underneath their vehicles to prevent oil from dripping onto the stones that line the square. “Oil or anything leaking from vehicles will damage that surface,” says Kim Leonard, who oversees bylaw enforcement for the city. She says the fines for being caught parking on the square can cost $25. In 2009, six people received such tickets, Leonard says.

But there’s one other question that still nags at me: If you’re going to use your legs to propel you around the rink, why not use them to walk from a legal parking space to eliminate the opportunity for harm to your fellow Kingstonians, or harm to the square itself and the repair bill that taxpayers will have to pick up? The potential for someone getting injured seems too high of a price to pay to save a few dollars on parking, or a minute of walking.

7 thoughts on “From Market to Park-it”