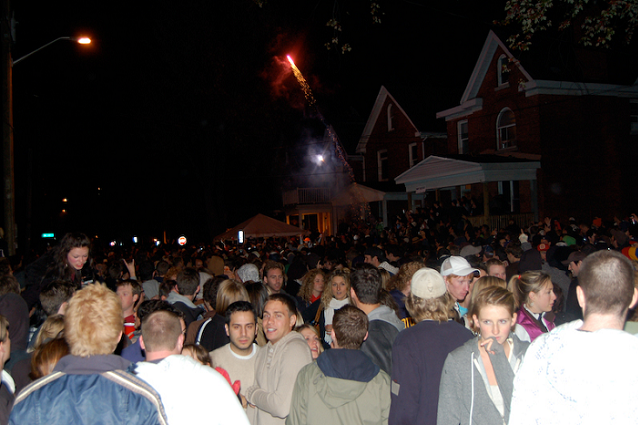 Every city has a seedy, wart infested underbelly of ugly issues that are capable of dividing and disgusting the local population.  For Kingston, a short list includes the ongoing third crossing saga, Block D development, K-Rock Centre location/finances/naming rights/etc, dog parks, bike lanes and waterfront paths, and the grand daddy of them all, Aberdeen.  The mere mention of the infamous Aberdeen street party incites blind rage amongst year round residents and proud alumni.  To add insult to the injured reputations of both Queen’s and Kingston, in the past, tax payers have been stuck with the bill for police services.  I’ll forgo the remainder of the history lesson and fast forward to today, which is exactly one week away from the weekend that should have been Homecoming.  In an attempt to keep the burning car lit for one more year, a non-sanctioned “Fauxcoming” street party on Aberdeen is being organized via not one, but two Facebook groups.  At the time that this was published, one of the groups had 5,402 confirmed guests, and 2,352 maybes.  Not that the party was ever sanctioned by the university, but now that the administration is washing their hands of the fiasco, you won’t find Queen’s volunteers handing out plastic cups, or assisting with first aid and post-party cleanup.  Instead, the only people handing out party favors will be the Kingston City Police.  Pray for bad weather, and zero fatalities. Thanks to Tyler Ball for his photo of the scene on Aberdeen back in 2007.