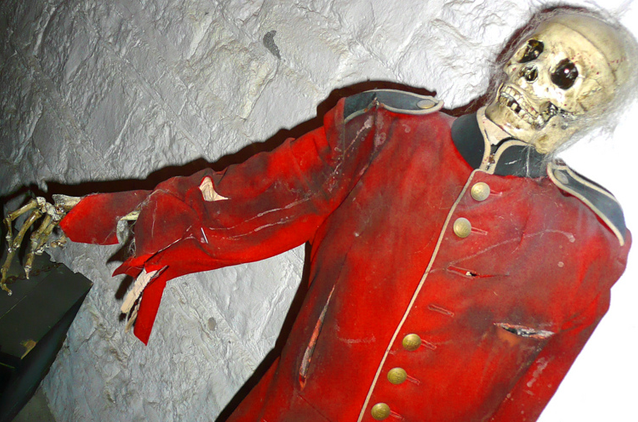 This past weekend was jam packed with all sorts of creepy crawlies, and ominous things that went bump in the night.  In an effort to ramp-up our Halloween spirit before the tricks and treats, we decided to brave Fort Fright on Friday night. That evening, a small band of sushi-filled, wine soaked friends and I climbed the dark road to Fort Henry, and embarked on a journey, which we would have a hard time recalling the next day.  Self-induced headaches do not deserve sympathy, and before you get the wrong impression, Fort Fright is worth every penny.

Despite the rain that came down for much of the afternoon, Kingston’s premier scare-ttraction was a pretty happening place last Friday.  We paid the $9 admission, affixed our neon coloured wrist bands, and set out in search of heart pounding adventure.  The spooky path ahead was clearly marked by various bloody skeletons, while boundaries were identified with bails of hay, and period-specific wooden fencing.  The attractions along the way are a mix of Hollywood-style animatronics, fully costumed actors, lights and ghoulish sounds, all set against the unique, and massive backdrop that is Fort Henry.

St. Lawrence Parks Commission GM/CEO Patricia Macdonald cites the suitability of the location as well as the fantastic effort devoted to the Fort’s transformation, as the reason for the attraction’s success:

We have one of the best, natural movie sets in the world for this style of event – damp limestone, creaky floors, tall shadows, wind off the lake, isolated on top of a hill – it’s perfect. The Fort Henry team have been working intensely since May preparing props, layout redesigns, ghoul training and all the extras that will make year two surprising to all that return from last year. Part of Fort Henry’s success has always been this team’s ability to continue to re-invent the site, while being mindful and respectful of its important heritage and history.

At the risk of giving too much away and ruining your experience, I won’t reveal all of the thrills within Fort Fright.  Spoiler alert:  the biggest screams tended to arrive after we’d mistook actors for mannequins, and they sprung to life wielding an axe, and a zombie-like moan.  Otherwise, although the animatronics and sets are top quality, they are not terrifyingly frightening, while some are moreso disturbing.  One scene involving an animated, demonic girl eating a spare limb was rather grotesque, and might not be the sort of visual some parents want to expose their children to.  But again, all in all the level of fun was well worth the cost of admission, and just because Halloween is behind us doesn’t mean that you missed out.  Fort Fright’s last week of the season runs from Tuesday the 3rd until Saturday the 7th of November.  Check our latest Flickr set, and enter…if you dare.