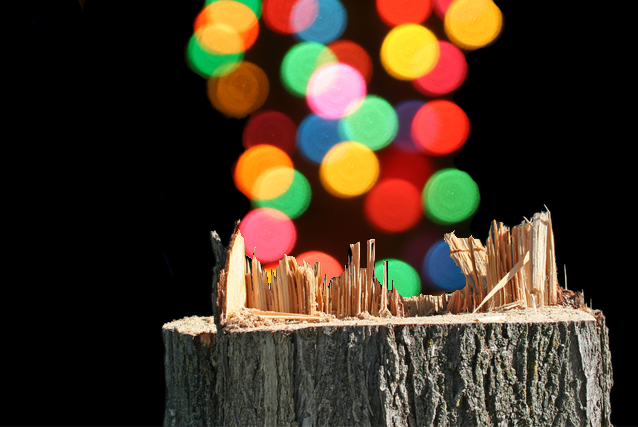 While listening to CBC Radio on my walk to work this morning, our local corresponded, JC Kenny, mentioned an interesting story, which has received little attention from Kingston-based media outlets.  When I arrived at work, I mentioned the story on Twitter and humorously dubbed the affair, Tree-Gate.  Within minutes, I received numerous queries from followers, who requested additional information, and a link to the original story.  Unfortunately, my attempts to find a podcast of CBC’s  regional report have been unsuccessful, and further, I have yet to locate a transcript.  In case you missed this morning’s broadcast, or Kingstonist’s recount on Twitter, the following summary is described to the best of my memory, without any intentional exaggerations or falsehoods.

The scene was set in late November, just before Kingston’s annual Santa Claus Parade, and official tree lighting ceremony.  According to the report, Mayor Harvey Rosen was making his rounds and noticed that the Christmas Tree in Market Square was slightly damaged, and misshaped.  Since the tree lighting ceremony was fast approaching, City Hall set out to replace the tree as quickly as possible.  Their plea for a substitute was answered by the Springer family, who had a suitable, grandiose tree on one of their commercial properties.   Subsequently, the City’s second Christmas Tree was unceremoniously slaughtered, relocated and decorated for the big reveal behind City Hall.

The story’s big twist came as JC went on to speak with a few Kingstonians who advised that they were not pleased that the tree had been cut down.  Not only were neighbouring residents displeased with the new, tree-less look of the vacant commercial property, but they were also upset that the City of Kingston’s tree by-law was not respected.  As trivial as it may seem to some, apparently no one bothered to file the required application to cut down our donated Christmas tree.

On the one hand, the Springer family should be thanked for their continued generosity, and coming to the rescue on such short notice.  That said, why have these by-laws if City Hall isn’t willing to enforce them, and follow proper procedures.  What do you think?  Is Tree-Gate really a dishonest scandal, or a minor incident that is forgivable given the circumstances?  Special thanks to Unhindered by Talent for the original photo, which was remixed by Kingstonist for this post.