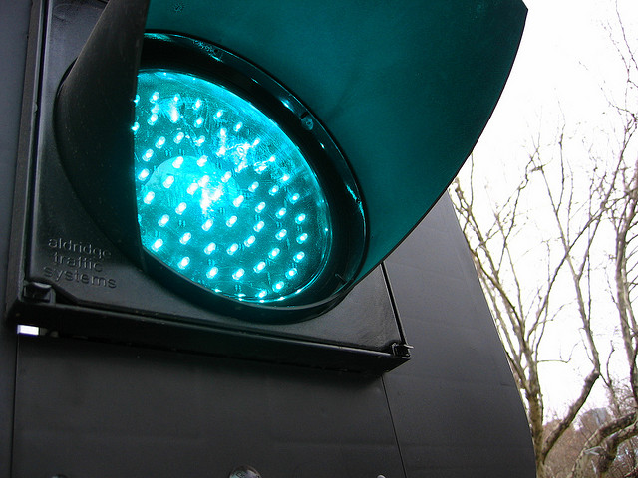 I live and work downtown most days but twice a week I have to make the dreaded drive to Kingston’s west end.  It shouldn’t be a long drive but it is because on average, I hit pretty much every single red light along the way.  Wouldn’t it be amazing if you could drive from one end of town to the other without having to stop on every block?  What if Kingston synchronized its traffic lights? It is actually possible but for some reason we just haven’t caught on here in Kingston.  Timed traffic lights are an easy solution to grid lock and congestion and is something that has been implemented in many cities in North America including Hamilton, Toronto and countless cities in the United States.  With our goal towards being Canada’s Most Sustainable City, reducing traffic congestion is something we should be putting on our priority list.

The benefits of synchronized traffic signals include:

Appreciated benefits are those that allow pedestrians to cross the street, allow the side street’s traffic to get out, and just produce a more pleasant environment.  Those can’t be quantified as easily as the vehicle hours but are equally as important to the community.

While 2-4 million dollars is certainly a large amount of money, compared to other projects, it is a reasonable cost to put towards improving the overall quality of life of Kingstonians.  Timed traffic signals are being used in many Canadian  cities as well, including Hamilton, Toronto and Richmond, BC, so why not Kingston?  Our history has given us an infrastructure that does not allow for easy widening of roads, eliminating that option in many parts of the city.  Traffic signal synchronization, however, is an easy, cost effective measure that could help get people around town more quickly and easily while reducing emissions and simply making people happier.

Below is a video of the drive through Hamilton from Dundas to Stoney Creek (close to 30km), stopping for only two red lights along the way.  Having done this drive myself hundreds of times, I can attest to the fact that it is as glorious as it looks.  Wouldn’t it be great to be able to do that here?

Thanks to Ted & Dani for today’s pic.

8 thoughts on “What if Kingston…”