Last March, Kingstonist covered a locally organized protest against the commercial seal hunt. In spite of the differing opinions on both sides of this issue, the resulting discussion managed to remain respectful. In that respect, I’m always amazed that our readers are able to debate such divisive issues, while maintaining proper decorum. This post is easily amongst the best of 2010 thanks to the significant traffic it generated, which reached far beyond the city limits.

“The greatness of a nation and its moral progress can be judged by the way its animals are treated.” – Mahatma Gandhi

“I would like to see the 6 million seals, or whatever number is out there, killed and sold, or destroyed and burned. I do not care what happens to them…the more they kill the better I will love it.” – John Efford, Minister of Fisheries and Aquaculture, Newfoundland and Labrador, 4 May 1998.
The protesters handed out buttons with the initials “S.O.S.”. Their plea was not “Save Our Souls”, but rather “Save Our Seals.”

Over 50 Kingstonian activists braved the cold and rain last Saturday to protest the Canadian government’s support for the annual commercial seal hunt. Standing in front of City Hall at Confederation Basin, the protesters spent two hours waving their signs at passing cars. Enthusiastic shouts and hollers greeted all motorists who signalled their support with a friendly honk.

The government of Canada supports the commercial seal hunt to the tune of well over $20 million in direct and indirect subsidies. While the seal hunt’s defenders claim the brutal practice is essential to the economy – in particular, that of Newfoundland and Labrador – its opponents argue that the costs far outweigh any perceived benefits.

Indeed, in testimony before the Standing Committee on Fisheries and Oceans, some sealers have indicated that the hunt only provides 5-10% of their income, rather than the 35% claimed by the Canadian government. In 2008, the seal hunt accounted for 1.2% of the total landed value of Newfoundland fisheries, according to a 2006 Newfoundland and Labrador Statistics Agency report.

Official support for the seal hunt has also brought a wave of negative publicity to Canada internationally. With the European Union considering a ban on the trade of seal products, sealers selling their wares are increasingly looking to China and Korea. The bulk of seal pelts are used to make luxury fashion garments which have limited market appeal.

Vicky Deodato is a local activist who has been at the forefront of the local animal rights movement with her group Kingston Animal Trust. Speaking privately at Saturday’s gathering – billed as Kingston’s third annual demonstration against the commercial seal hunt – Deodato fired back at the government’s tactic of falsely portraying protesters as opponents of the unrelated Inuit seal hunt.

“The Canadian government is trying so hard to keep the seal hunt going that they’re misleading people and saying that it has to do with the Inuit seal hunt, which it does not,” she said. “This is the commercial seal hunt, and they’re doing everything they can to try to mix it up to make protesters look bad, that we’re trying to take money away from the Inuit.” 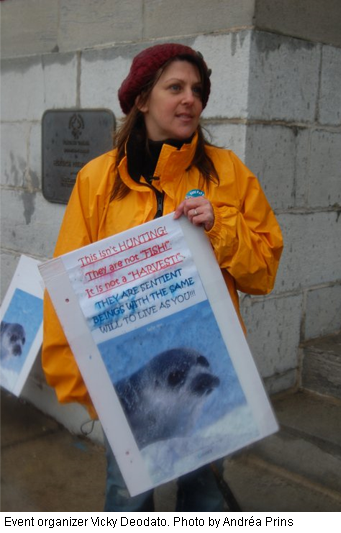 In reality, the protesters acknowledge seal meat as a necessary staple of the Inuit diet. Seal, Deodato allowed, is “what [Inuit] have to eat. I mean, they can’t grow things, they don’t have gardens, they can’t eat oranges and they can’t grow wheat.”

Furthermore, the Inuit take pride in using every part of the seal, whereas in the commercial hunt, “most of the seal meat and blubber is wasted; it’s left on the ice to rot.” This figure doesn’t even include the 26,000 seals who are “struck and lost” annually – wounded by a sealer’s blow or gunshot, but who escape or sink into water before they can be recovered.

Equating opposition to the commercial seal hunt with opposition to the Inuit hunt is a cynical ploy by pro-sealing forces to demonize and discredit those groups (Sea Shepherd, the International Fund for Animal Welfare) most active in the demonstrations. Why is the Canadian government so unanimously in favour of the seal hunt?

Predictably, it all comes down to politics. In order to win seats in Newfoundland and Labrador, all parties support the seal hunt in order to ensure that they have a chance of taking those seats. The commercial seal hunt mostly involves workers from Newfoundland, Nova Scotia and Quebec.

“It’s 6000 fishermen that are out of business, that aren’t working at this time of year, and the government pays for most of this through indirect ways,” said Deodato.

The government’s generous financial support for sealing is a poor match for the comparatively meager benefits earned by the sealers themselves. Deodato estimated the average sealer will receive a mere $2000 each year for participating in the hunt. The 2008 landed value of $6.9 million, divided amongst the estimated 7000 active sealers, meant that each sealer received on average only $1000.

Such paltry sums, Deodato felt, do little to justify the massive annual slaughter from either an economic or an animal rights perspective. Rather than spending tens of millions of dollars this year on promotion, subsidies, and “all the wining and dining they do to the officials,” she suggests a simpler solution – giving the money to poor communities directly.

“Just give them the damn $2000 each,” she said. “I don’t even understand it. Newfoundland is capable of so much more. They could do wind power out there, eco-tourism is huge; there’s so much they could be doing out there to raise money instead of this.”

For Deodato, the immense suffering inflicted on seal populations is indefensible. Her detailed descriptions of grotesque violence minced no words. 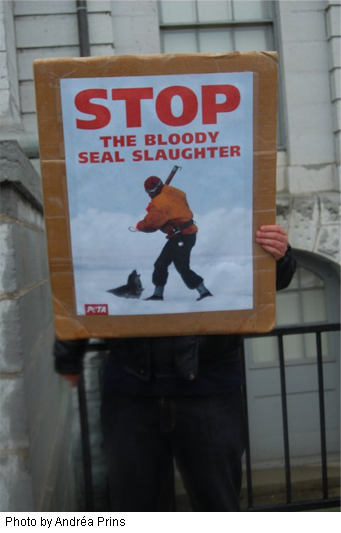 “About 92% of these seals that are killed are 4 weeks old or younger,” she said. “These are sentient beings whose mothers are 10 feet away watching their babies – that they just gave birth to, that they’re still nursing…being clubbed and skinned. I mean, this is a horrible thing that we’re doing. 100% at this time of year, I’m embarrassed to be Canadian.

“Forgetting that it’s less than 1% of Newfoundland’s gross domestic product, forget that the government then subsidizes it; it goes right down to how inhumane this entire thing is. If this was 300,000 puppies being clubbed barely unconscious and then skinned, you would have all of Canada standing up in arms.”

Even more alarming to Deodato was the method for killing gray seals, a hunt which occurs two weeks before the culling of harp seals.

“The gray seal has such a strong skull… a really thick cranium,” said Deodato. “They have to hit them so hard they break their baseball bats, and then they skin them.”

Though there is an official quota that theoretically limits the slaughter to around 300,000 seals each year, Deodato said there is little accountability. “Who’s going to enforce it?” she asks rhetorically. “The Canadian government is totally behind this.

“They consider them fish,” said Deodato, “or they call it a harvest, like they’re a grain for cereal. It’s a sentient mammal. They nurse their babies. This is just completely wrong. It breaks my heart, literally.”

One thought on “Top 10 of 2010: Protesting The Commercial Seal Hunt”