As I start to consider my New Year’s resolution for 2011, I think a look back at one of my goals from 2010 is in order. My personal quest to eat and support local food producers is an ongoing quest, while my initial plea for help was well received. We got some great information on local CSAs, markets, and producers, that hopefully got some more people interested, or at least aware, of food that’s around them. 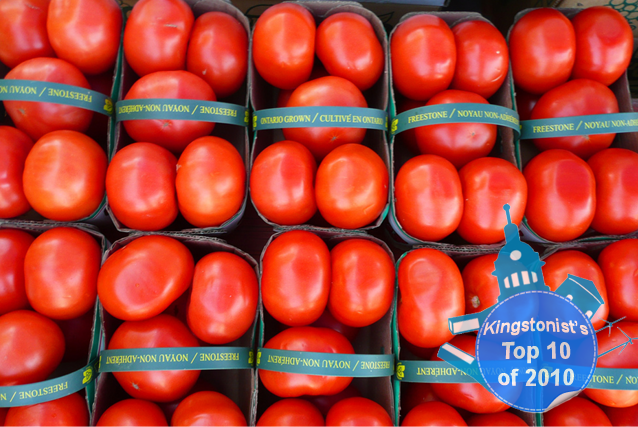 The Rise of the Locavore

Like many people, each and every year I make a pledge to better myself, and give back to the local community. This year, I purposely kept my New Year’s resolution to myself. It’s not as though I was ashamed of my master plan for 2010, rather, I feared that if I put it out there, I might not succeed. You see, for every successful resolution I’ve made, there are at least ten that haven’t quite stuck. Now I’m not saying that communicating my New Year’s resolutions to others has resulted in their failure over the years, but this year I knew that my plans might raise some eyebrows. To clarify, it’s not as though I vowed to take over the world or drown cute little forest critters in 2010. Instead, I resolved to incorporate more organic foods into my diet, as well as embrace the local food movement.

Terms such as locavore and the 100 mile diet have been around for some time, but they’ve become increasingly popular over the past few years. The concepts of both are generally the same, as they promote sustainability and environmentalism through a locally sourced diet. This is where Kingston’s modest size, and our proximity to ripe agricultural areas comes in handy. To the west communities such as Picton are home to outstanding orchards and vineyards, while there are many farms north of the 401 specializing in everything from beef to pork and poultry. A bit closer to the city, Wolfe Island’s Pykeview Meadows produces everything bison, Desert Lake Gardens grows organic veggies and the list goes on.

Whether you fancy yourself some honey, cheese, bison burgers, fruits or vegetables, you can get it all during the summer months at Kingston’s Farmers Market. But what about the rest of the year? Obviously one of the drawbacks of a locally sourced diet is that one has to eat what’s in season, while foreign produce such as bananas are not offered through our region’s menu. At this early stage in my resolution, I’m still learning to embrace seasonal variation, and truly appreciate how great it is to eat freshly picked, locally grown blueberries. That said, there’s nothing wrong with cheating a bit and stowing some berries away in the freezer. And for the record, I have not given up bananas.

With my resolution in mind, I found it fortunate to discover Kingston’s new Local Food – Local Chefs initiative. This group is comprised of the Kingston Farmer’s Market Vendors Association, local restaurateurs, retailers and farmers, whose collective objectives are as follows:

The Farmers Market and Fare on the Square are two events that come to mind, which truly embody the core goals of this group. Even so, I am looking forward to see how this collective will work to improve and promote the local food movement.

Getting back to my resolution, my biggest challenge thus far has been locating grocery stores and restaurants that cater to locavores. What’s out there? Do we have any formal garden sharing networks or community vegetable plots? Please help further the local food movement by sharing your knowledge and best practices via a comment or two.