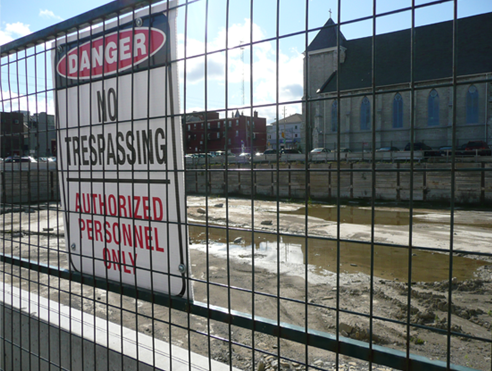 How long has it been, one year or two? I honestly can’t remember, but it’s been a long time since I last saw construction equipment around the massive hole on the corner of Bagot and Queen. At last check this project was a $10 million, apartment building that was being developed by the local property holdings group known as Kincore . Kincore seems to know what they’re doing, as they’re behind some really amazing restoration projects including: the The British Whig building, Brock Street Common (Chien Noir, Atomica), and Gourdier Lofts. But when it comes to that massive hole, I can’t help but wonder what’s taking so long?

According to a report to council dated the 3rd of April, 2007, Kincore and their subsidiate Queen Bagot Inc. were given the green light to develop their Affordable Housing Program Brownfield Initiative. The 90 unit affordable housing project was then supposedly forwarded to the Ministry of Municipal Affairs and Housing, along with a copy of the Kincore’s submission for provincial funding consideration to the tune of $6.3 million. That’s honestly where the online paper trail ends. The only other mention of Queen Bagot Inc. is on the Ontario Ministry of Affairs and Housing, where the name is listed as a project sponsor.

Within the realm of multi-million dollar real estate developments, I am sure that parts of this story, and the lack of information available actually make sense. Disclosing key financial, legal and otherwise priviledged information pertaining to the building project is not meant for Joe and Jane Public. That said, the hole has people talking. Within the past week I stumbled upon various conversations regarding the massive hole (more pics here ), while theories have ranged from contaminated soil to a bid to strike the affordable aspect from this housing project.

What have you heard? Are you at all interested in the implications such a building will have on the downtown? We want to know, so drop us a comment or two. For me, I’m concerned about preserving our relatively low-lying skyline along Princess and Queen Street in the core. As well, if the apartment building just down the street is any indication about what the building might look like, it would be a severe deviation from the carefully crafted restorations produced by Kincore. So many questions…

3 thoughts on “There’s a Hole”