We’re always amazed by the op-ed submissions that end up in our inbox, while one of the best of 2011 came from Alan Foljambe. He wrote about peak oil, commuter culture and their relation to the proposed third crossing over the Cataraqui River. Alan articulately argued that the third crossing is a non-starter for a sustainable city, which made us think about whether or not the project was a necessity, luxury or death sentence. 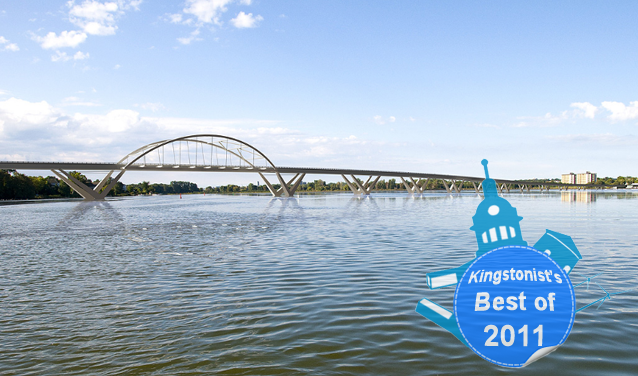 Despite the hard work done by the creators the Sustainable Kingston plan, Kingston is not a sustainable city. It may well be “the most sustainable city in Canada”, but since, to my knowledge, no city in Canada is anywhere near sustainable, that isn’t really saying much. In the land of the blind, the one-eyed man is king, and the same could be said of a community that engages in some minor reforms within a world that is filled with sprawling, consumptive and oil dependent cities.

If the people of Kingston want to get serious about sustainability, we need to let go of slogans and municipal competitiveness and focus on deep, substantive, and probably controversial changes. Reforms that simply attempt to accomplish business as usual in a slightly less harmful way are not good enough. We need to be questioning the cultural and economic assumptions that have made Kingston and virtually every other city on earth dependent on fossil fuels, and have brought the natural world to a state of near-collapse.

Cultural and economic futures are not made of whole cloth, but evolve through decades and centuries of small decisions. The failure of mainstream environmentalists to recognize this, and their resulting willingness to agree to compromise solutions, is what has led us to our current situation, in which we are witnessing rapid species extinction (including declines in the populations of songbirds, amphibians, and salmon), catastrophic climate change, ongoing urban sprawl, deforestation, and loss of topsoil. I could go on.

We as a culture and as a local community need to awaken to our precarious situation, and quickly. We need to accept the facts, and act accordingly to design a future Kingston that contributes less to, and is more resilient to, the difficult times that lay in our very near future.

This brings me, of course, to the proposed third crossing over the Cataraqui River. If this project goes through, the city will be committing itself to yet more private car traffic at the very dawn of an age that will see a drastic reduction in private car use. Not voluntarily, of course, but through intractable economic forces. As of this writing, oil prices are again over $100 per barrel, after being artificially depressed through market manipulations following their spike in 2008. These fluctuations will continue to occur as market forces battle geological reality, but the overall trend will continue upward. Given the length of the planning process, gasoline prices may have topped two dollars a litre before construction of the third crossing even begins, and they will continue on from there.

Through bureaucratic inertia, the desire of developers to continue with business as usual, and lack of imagination on the part of commuters, a plan that will be dead in the water before it even begins is on the verge of sucking millions of dollars out of the Kingston economy. Creative solutions that include organized car pooling, bicycling, telecommuting, walking, and satellite workplaces could not only ease causeway traffic concerns but make the lives of thousands of Kingstonians easier, less stressful and more connected with their neighbors and community.

This plan was first presented in the 1960s, when the issue of peak oil was virtually unknown. We have no such excuse today. If peak oil is actually occurring, and Kingston pursues this project, the city will find itself with a multi-million dollar white elephant, a city of people who can’t afford to drive their cars, and a lack of funds to create a viable public and alternative transportation system.

If peak oil is not occurring, construction of the third crossing will instead lead to further sprawl on the east side of the Cataraqui and an increase in traffic until we are confronted with two crowded bottlenecks instead of one, at which point people will begin clamouring for a fourth crossing. Where does it end?

With or without peak oil, the third crossing is a non-starter for a sustainable city.
——————————
Submitted to Kingstonist’s Community Soapbox by: Alan Foljambe.

5 thoughts on “Best of 2011: Sustainability and the Third Crossing”