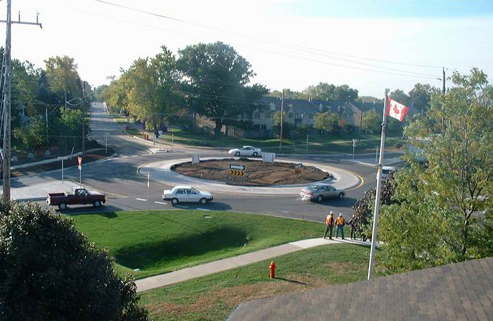 In my introduction a couple of days ago, I indicated that I was a fan of traffic circles. That was, in fact, a poor choice of words, as what I am really in favour of are yield at entry roundabouts vice traffic circles. “What’s the difference?!” I hear you exclaim, they make me dizzy and are probably unsafe and do they really work as advertised? If they are so good, why aren’t they in use in Kingston? Why did Kingston eliminate the traffic circle at Princess and Bath?

First let’s address the differences, then dispel any fears you might have regarding their safety, and demonstrate some additional benefits. Finally I will propose one or two locations to try them out and challenge you to sound off – do you like them? Hate them? Why?.

Traffic circles (or rotaries as they are sometimes known) are quite often multi lane one way circular traffic patterns with multiple entries and exits – they are often quite large and intimidating. Due to their large circumference, traffic within the circle can move at high speeds which can intimidate drivers. Roundabouts by comparison are small radius traffic control installations with the following common features – (1) yield at entry – that is traffic within the circle has the right of way; (2) due to their small circumference, traffic entering and moving through the roundabout moves at lower speeds thus reducing both the incidence and severity of accidents; and (3) they are often used to replace signalised junctions at medium volume intersections.

Finally, what added benefits do roundabouts offer? Significantly, traffic continues to flow rather than to stop altogether – numerous studies have demonstrated that when traffic continues to flow, even at a reduced speed in certain areas, the total trip time is shortened. Roundabouts contribute to a decrease in vehicle generated pollution as idle times are eliminated, and the higher consumption generated by acceleration following a green traffic signal is reduced or eliminated altogether.