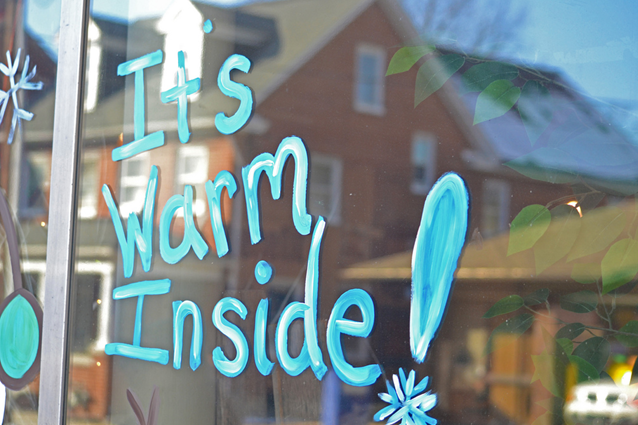 On the 21st of December 2013, Kingston and the surrounding region endured a severe ice storm, which lasted in excess of 72 hours.  The results remain visible in various parts of the city, particularly in parks where large tree limbs still litter the ground.  Few Kingstonians were spared from the aftermath of #ygkice, which closed businesses, made roads and sidewalks impassable, as well as blacked out parts of the Limestone City for days.  On the particularly icy morning of December 22nd, our household awoke without power, however our tootsies were ultimately saved by our glorious natural gas fireplace.  Days like that make me particularly thankful that we don’t rely on electricity to heat our home, or fuel our stove top.  We can somewhat weather the worst winter storm!  This sentiment became stronger by the hour, as pockets of the city continued to deal with outages, which were not resolved until well after Boxing Day.

Reports also surfaced of an apparent propane shortage, which left rural Kingstonians and customers throughout Eastern Ontario in dangerously cold territory.  Kingston and the Islands’ MP, Ted Hsu, recently acknowledged the severity of the propane shortage in a statement released last week:

I have been concerned about the propane shortage resulting in many of my constituents and many other Canadians being unable to heat their homes during this cold winter season.

Accordingly, Hsu has announced that he will support a motion presented by the Liberal Party’s Natural Resources critic, Geoff Regan, which asks that the Standing Committee on Natural Resources undertake a study to determine the cause and develop strategies to mitigate propane shortages in Eastern Ontario and elsewhere in Canada.  Not to sound pessimistic, but I’m not holding my breath on any significant revelations or changes.

Furthermore, while I doubt that strong opposition to such a motion exists, I believe that a more pertinent issue stems from the high cost of heating homes during the winter months.  With the recent drop in temperatures across the region, everyone has been using more energy, and resources have been stretched thin.  Depending on how you heat your home, a $20 to $40 increase on your next utility bill is not out of the question, however for many, such an increase is not in the budget.  Aside from hoping for the early arrival of spring, there really isn’t any relief in sight as experts predict that the cost of heating our homes could realistically increase by 2.5% annually over the next 10 years.  Accordingly, this week’s poll asks:

Are you concerned about rising home heating costs?

As a follow on to this week’s poll question, I’m curious as to whether or not you prepared to pay even more to heat your house over the next decade?  Furthermore, what role do you think government should play in helping to reduce the impact on consumers and businesses when it comes to heating?  Finally, what strategies do you employ to help keep the cost of heating your home within your budget?  Drop off your comments below.

Special thanks to MTSOfan for the image associated with today’s post.