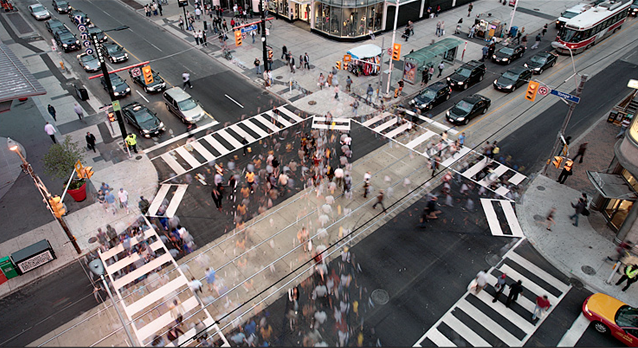 Right foot, left foot, one foot in front of the other and so on.  Walking is a pretty pedestrian topic of conversation, but in the past we’ve stirred up some fairly decent debates centred around this activity, specifically whether or not pedestrian friendly streets are a good fit for Kingston (they are), as well as etiquette to ensure widespread enjoyment of our sidewalks.  Whether your daily commute involves an automobile, bike lanes or public transportation, chances are you’re also relying on your own two feet to get to and from all points in between.  In recent months there’s been a lot of talk about the lack of parking downtown, lane expansions to combat traffic congestion and of course, the ongoing pursuit of a third crossing.  In an effort to shift the focus back on the needs of those who commute by walking and rolling, this week’s question asks:

Should a pedestrian scramble be established in downtown Kingston?

For readers who may be unfamiliar with the concept of a pedestrian scramble, also referred to as diagonal crosswalks or x-crossings, they’re used as the busiest of intersections whereby traffic is stopped in all directions to allow those on foot to cross in whatever direction they desire (video demo).  Those who support pedestrian scrambles tout the benefits such as fewer incidents of jaywalking, and decreased time required to clear pedestrian crosswalks.  Opponents argue that the benefits are overstated, and that increased wait times at x-crossings have resulted in higher rater of jaywalking and pedestrian strikes.  While the City of Kingston continues to seek new ways to make downtown, specifically Princess Street, more pedestrian friendly, recommendations have thus far opposed the pedestrian scramble.

Is there a downtown intersection with enough foot traffic to benefit from a pedestrian scramble?  Should the City of Kingston trial an x-crossing during the busy tourist season, similar to the popular Princess Street Promenade?  Please drop off a comment or two and let us know what you think about pedestrian scrambles. As an added incentive, this week we’ll be sending out one of our awesomely attractive, impossible to get anywhere else Kingstonist tees to the person responsible for our favorite/most thought provoking comment.

Special thanks to wvs for today’s photo of Canada’s first pedestrian scramble, located at the intersection of Yonge and Dundas in Toronto.