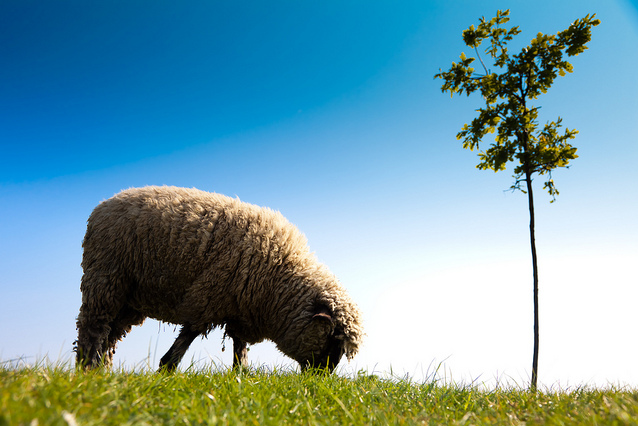 When we purchased our first home nearly five years ago this summer, we eagerly embraced all of the challenges and chores that came along with being new home owners. This resulted in various purchases such as shovels for tending to snow-covered sidewalks, a ladder to help us clear out leaf-packed eaves-troughs, as well as our very first lawnmower. When considering all of the options to tackle cutting our modest-sized lawn, we researched next generation gas- and electric-powered mowers, and took into consideration the long-term fuel and maintenance costs.  Big box retailers enticed us with seasonal sales, but the price of even the most basic mower, well over $250 at the time, was enough to convince us to consider alternative, low-tech solutions.  Enter our $99 reel mower, powered by entirely by muscle and determination.

Every time I mow the lawn I am stopped by passers-by on the street with questions such as “how much does it cost to fill that thing up” and comments regarding how good a workout it is.  Considering the fact that we haven’t had to spend time or money filling it up with gas, replacing spark plugs, or even sharpening its blades, our reel mower is undeniably one of the best purchases we’ve ever made.  Furthermore, with estimates that suggest gas-powered lawn mowers crank out 5% of the nation’s air pollution, it’s really satisfying to know that we’re doing the environment a solid.  A few of our neighbours have even followed suit, upgrading their gas-guzzling mowers for the reel, human-powered variety.  Too bad the City of Kingston, with all its public parks and greenspaces, can’t do the same.

Last week, a lawn-related story from Paris caught my eye, as a small flock of black sheep had been deployed to city parks to do what they do naturally: eat grass and fertilize the land.  This of course got me thinking about the Limestone City’s ongoing efforts to become Canada’s most sustainable city.  What if Kingston employed grazing animals to trim public greenspace? While the term “eco-grazing” may be the latest addition to the treehugger’s dictionary, the concept of hiring sheep, goats and cows to trim our lawns pre-dates the settlement of Kingston.

For centuries, if not millennia, grazing animals like sheep and cows have been used both to trim and to fertilize fields. In fact, many of the oldest urban parks were originally populated by farm animals, sometimes just during the day when their owners went into to town to do business. A funny if only marginally related story about in-town grazing comes from Cambridge, Massachusetts, a former suburb of Boston that’s now very much a part of the city. Back in the early days of Harvard College, one of the perks of being a professor was that you were allowed to graze your cow in Harvard Yard. Back in 2009, retiring professor Harvey Cox actually exercised this privilege when he brought his cow Faith to school.

In recent lean economic times, a School Board in Pennsyvlania realized $15,000 in savings per year by enlisting the help of farmers and flocks of 30 sheep to tend to the grounds.  Of course, both this example and the above-mentioned experiment in Paris required the installation of fencing to ensure the herd did not venture into traffic and employ themselves in other undesirable areas.  With that in mind, the grounds at the Memorial Centre, fenced-in dog-parks as well as greenspace that runs parallel to the waterfront come to mind as spaces that may already be suitable testing grounds for Kingston’s very-own grazing initiative.

Similar projects have been established and are springing up elsewhere such as Los Angeles, Boston, Cleveland and Portland.  The latter has employed a small herd of goats to cut the grass and reduce the prevalence of weeds on a 2-acre brown-field located in the city’s downtown.

The deposition of goat droppings help to enrich and accelerate the productive capacity of urban soils, which if repeated over time, could facilitate the nurturing of second stage vegetation (slower growing vegetation that tends to appear after pioneer/ruderal vegetation have prepared the ground).

While Kingstonians already support and operate backyard chicken coops, could grazing animals be the next phase of evolution for urban sustainability for the city?  Whether you prefer to call it eco-grazing or simply grazing, please drop off your thoughts on trialling such a potentially-lucrative initiative in Kingston.

Thanks to King…. for today’s photo.