I’ll be the first to admit to being sucked into the froyo frenzy – I feel a lot better knowing I’m savoring nonfat soft serve topped with my signature choice of strawberries and yogurt covered pretzels as oppose to sitting on the couch with a bucket of Haagen-Dazs. Not to mention, I’m a stone-throw away from the inviting atmosphere of Menchies and tend to go often for a rewarding cool down after a workout. But after a few trips –okay I’ll be honest – closer to a dozen, I realized the amount of fancy plastic spoons I was wrongly disposing – and it hurt like an everlasting brain-freeze.

Last summer Kingston welcomed franchise hit Menchies into the downtown mix and it’s been nothing less than all the rage in the downtown core for all ages and let’s face it, those confined by dietary restrictions or allergies. From peanut free to gluten free, to kosher choices to dairy free, and from low fat to non fat, it’s a good place to be. The nightly lineup in front of the ever-changing flavors declares it accepted in the heart of Kingston.

However, the admired franchise founded in 2008 in California and quickly swirling into popularity worldwide, offers plastic spoons to every customer, and in Kingston lacks proper recycling for the trendy utensils.

The spoons I was consistently throwing into one of the three trashcans in Menchies dine-in froyo bar will now sit in a landfill for at least 500 years. At least. Shame on me. That’s not a little contribution to our earth’s dwindling health, especially when you consider the amount of people pouring into our local Menchies for a treat only to toss their remnants into the nearest garbage lining the exit.

I understand the fabulous and tasty frozen yogurt movement has churned up the nation.

And the spoons are cute. They are bright, change colour every so often, and the convenience of them is overwhelming as they practically stare at you while you’re weighing your cup of heaven and paying top dollar for your personalized creation, drooling over the scale ready to dive in. It’s hard not to grab one.

But what about the hundreds upon hundreds of patrons that don’t realize they are not only taking a plastic spoon for their 15-minute indulgence, but aimlessly throwing it into our landfill. And let’s get real here – if you’re at Menchies and don’t have your own spoon in your pocket, you’re practically guaranteed to snatch a spoon.

I decided to sit in at Menchies on two random evenings and observe. Watching approximately two to three dozen individuals getting their froyo on, at moments at the edge of my seat, not one person kept their plastic souvenir after spooning in their treat. With every empty bowl came an accompanying gunk of pastel plastic into the trash. 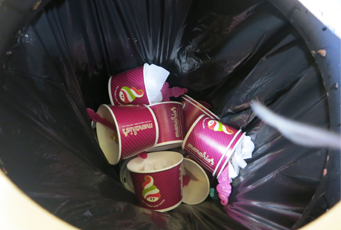 I implied to the sweet and friendly staff they would probably benefit from a recycling system for the spoons. In response, I was given the option of taking my spoon home and re-using it or simply, chucking it – which in all due respect is a fair answer – perhaps the onus is on me. But is it fair to expect every visitor will hold on to their spoon?

I don’t think so. Having a proper recycling bin onsite for the utensil is necessary – people would be more inclined to recycle or maybe even salvage their spoon and reuse it.

Menchies has made it clear on their international website the spoons are dishwasher safe and meant to take home for reuse – for that I commend Menchies. The bigger issue here is the reality of how many people are taking these spoons home and tucking them away into a drawer for daily use. I know I wasn’t, despite the committed customer I had become, until I realized how many spoons I was thoughtlessly hurling into black garbage bags.

The blame is not all on Menchies. Unfortunately many establishments in Kingston are guilty of take away disasters, not to mention the grocery franchises that still hand out plastic bags. But even famous food franchises like McDonalds and Burger King have recycling on site. Starbucks is another franchise with a sustainable footprint, making sure to recycle and reduce the amount of waste. Perhaps it’s time for Menchies Kingston to look into the potential consequences their spoons could have on the environment and consider some options. A specialized recycling would be great – but to really turn heads, using eco-friendly hardware such as bamboo utensils would be a huge transformation.

Kingston’s local froyo bar Mio Yogi does have a designated recycling for their spoons. The staff washes the recycled spoons and sends them off to be properly recycled in bulk. Kudos to Mio Yogi. Other locals have also entered the realm of sustainable takeaway. Popular places such as Harper’s and MltDwn have biodegradable take home containers for their delicious burgers and feisty grilled cheeses, both with recycling on-site.

I’m not implying to boycott our downtown Menchies because the froyo bar fails to promote recycling. But I do think people need to be guided by these large franchise establishments to recycle on-site and frankly, I think that onus is on the business.

If Menchies were to promote recycling as much as they endorse their new flavours, there is the potential for a big turnaround in eco-awareness.

6 thoughts on “Menchies: Got Recycling?”