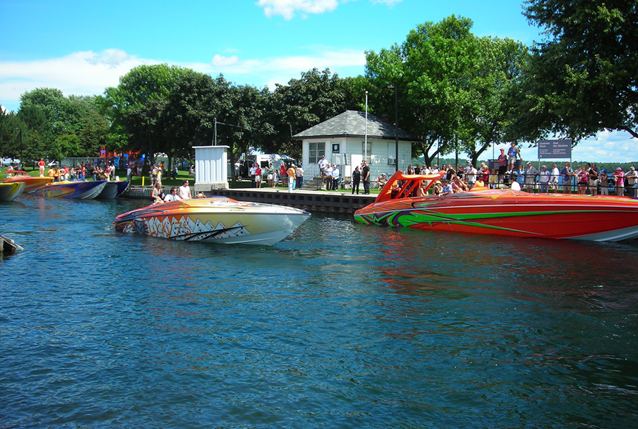 This week there’s been a bit of a buzz around the local blog/tweet-osphere, specifically via K7waterfront, regarding the future of one of the city’s most popular summer events.  I suppose the popularity of this activity really depends on who you’re talking too, but regardless, the annual 1,000 Islands Poker Run is definitely a gong show that is hard to miss. Every year huge boat trailers plunk themselves down along Ontario Street, where massive speed boats are put on display; terms such as turbo, bikini clad, gas guzzlers etc… are synonymous with them all.  The show and tell draws a crowd, if for no other reason but because the roads are blocked off and people still want to get a scoop of White Mountain ice cream.  Then comes the main event where teams speed back and forth between Kingston and the great blue yonder, all the while collecting cards in an effort to make the best poker hand (or something like that).  All in all, it’s really a contest to show off who’s got the biggest and loudest boat.

As a young lad, I can remember being enamoured with dump trucks, bulldozers and the like.  Had I been exposed to a Poker Run, I am sure that I would have been equally as enthralled with the massive aquatic beasts.  That’s all to say that I appreciate there is a fan base for the 1,000 Islands Poker Run, but is that enough to warrant the damage it causes?  This is the sort of question tackled by Sustainable Practices Leave A Sustainable Heritage, aka SPLASH, a group whose mission is to encourage and promote sustainable, participatory events that respect and celebrate the natural resources in our community.

In SLASH’s March info kit, they argue that the Poker Run should be replaced for the following reasons:

You have to admit that SPLASH makes a pretty good case, even in light of estimates that Poker Run brings in revenue from 50,000 spectators.  I really want to hear what you have to say about this one.  In case you agree with them, perhaps you’d consider joining their Facebook group.