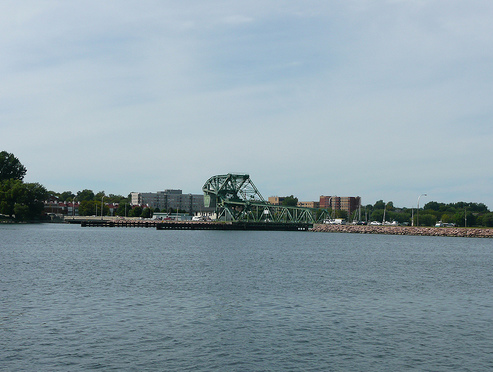 The other day whilst navigating the power outage induced traffic jam across the LaSalle causeway (aka the Green Monster), I found myself noting the similarity between this lift bridge and another with which I am familiar, the ‘blue bridge’ in Victoria. Not believing in coincidences, I thought that there had to be more to it and once at home and with power restored, a little research revealed the following infobits:

Did you know that the LaSalle causeway lift bridge shares a common feature with San Fransisco’s Golden Gate bridge? Mr. Joseph Strauss was not only the designer of our lift bridge, but he was also the chief engineer of both the Golden Gate bridge as well as the Lions Gate Bridge in Vancouver.

Did you know that the LaSalle Causeway bridge is in fact a Strauss Trunnion Bascule Bridge (STBB) of which several are still in use in Canada? Of all the STB bridges in Canada, ours resembles most closely the dual road / rail Johnson Street Bridge [aka the ‘Blue Bridge’] in Victoria, British Columbia. Both are of a fixed girder design with hollow concrete counterweights although the blue bridge carries three lanes of traffic as opposed to the two lanes across the causeway.

Did you know that the LaSalle Causeway bridge is not the original causeway connector as there have been a few over the years?

Did you know that according to City documents the LaSalle Causeway accommodates 900 vehicles per hour during evening rush hours, while the forecasted demand is expected to rise to 1640 vehicles/hour by 2026?

And finally – did you know that the subject of a third crossing has been a near universal topic of discussion amongst Kingstonians the day after a weather / accident / power outage induced traffic jam along the causeway?

Check out some pictures of the causeway bridge on Kingstonist’s Flickr.