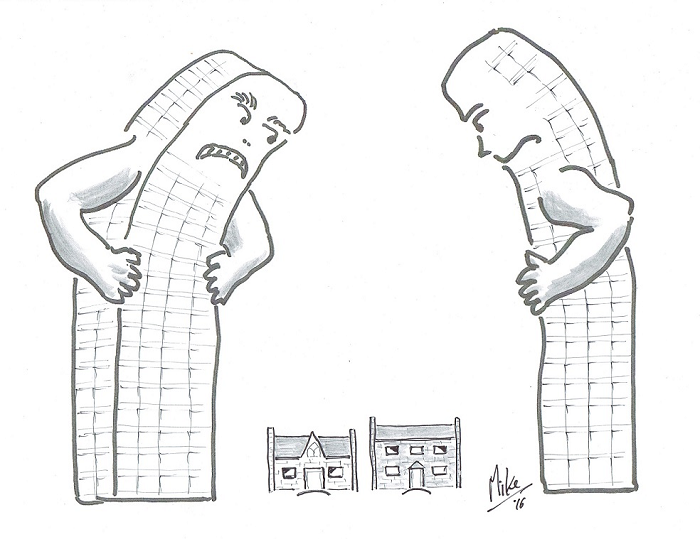 Why did I draw this? Because, like so many, I feel the unique attraction of Kingston will be lost once the first truly high-rise buildings go up. We have mid-rises already.

Kingston unique? Yes, for a start, our waterfront setting is something rare. Then consider the old city itself. Kingston is blessed with a Human Scale downtown where almost everything is walkable and the buildings do not loom. I used to walk to work up Bay Street, I know what looming feels like!

Not only Human Scale but, despite some mid/late 20th Century blots, a city full of varied and beautiful architecture in limestone and brick. The planned 20-storey buildings for Lower Queen Street and the Capitol proposal on Princess will open the way to others, until our old buildings cower amongst the roots of the towers.

Dwarfed, shaded from the sun, bullied into submission and blocked from view they will fade away until Kingston becomes just another North American city.

Bullied because developers are shouldering in, selling apartments not yet approved for construction. Pushing the assumption that the bait of tax dollars will over-ride careful planning. Making careful use of timelines for introducing proposals. Assuming intensification can only be done vertically.

Friends of ours looked at several Canadian cities for retirement – and chose Kingston. They saw it as beautiful and unusual, in that it has the feeling of a small town with the amenities of a much larger city. I suspect many of us feel the same, let’s not spoil it.

————————————————————
The City of Kingston Planning Committee will discuss the proposal by Homestead Land Holdings Ltd. to build two 20-storey towers on Queen Street tomorrow, Thursday, February 18th, at 6:30pm at City Hall. Members of the public are permitted to speak at this meeting and everyone is encouraged to attend and make their views known. If you are unable to be there, letters can be sent to Alex Adams [email protected]

9 thoughts on “The Downtown Bullies”