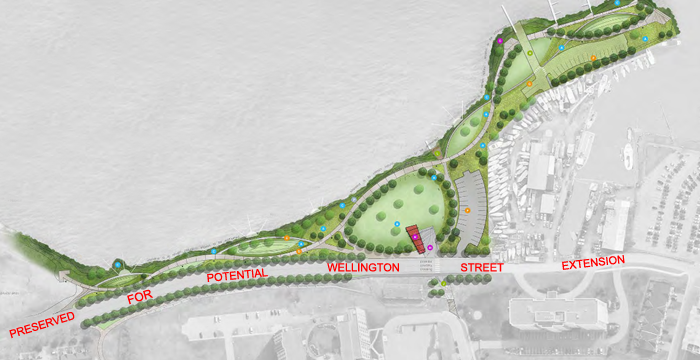 Over a year ago, opponents of Kingston’s proposed Wellington Street Extension were informed that the WSE cannot be removed from the Official Plan and other city policy documents without a secondary planning process for North King’s Town. This spring the visioning for that process began, with a launch in May at the Royal Canadian Legion on Montreal Street. In June, a well-attended brainstorming session led by Dialog (the consultants hired by the city) was held at the Portuguese Cultural Centre. With Skeleton Park Arts Festival organizers, city planning staff co-hosted a very successful barbecue and concert in Doug Fluhrer Park. City staff were on hand in McBurney (Skeleton) Park on Saturday June 25 to solicit input from festival attendees on the North King’s Town visioning, and set up an information booth at the Princess Street Promenade on July 30th. More pop-up consultations took place August 4th, and the process is just getting started.

All this is necessary, apparently, because although running an arterial road through a waterfront park is an unpopular plan that is neither consistent with good planning practices nor Kingston’s own policies, nothing can be changed without at least two more years’ work and hundreds of thousands of taxpayer dollars spent.

In contrast, if a developer wishes to ignore city documents (the Official Plan, its specific policies, the architectural guidelines, zoning bylaws etc.) and propose a high rise development for an area of the city where building height is restricted to preserve the human scale and historic fabric, there are fewer obstacles in the way.

Removing the outdated Wellington St. Extension from the Official Plan and other documents is proving to be an enormous challenge. Residents respect the process, however, and have seized the opportunities to engage with city planners and the consultants. Meanwhile, the owner of the Capitol Theatre property has jettisoned our guiding documents and is poised to stomp on our downtown.

The City actively encourages us citizens to participate in city planning, but fails to demonstrate to us why we should even bother.
_____________________
Submitted to Kingstonist’s Community Soapbox by Anne Lougheed.