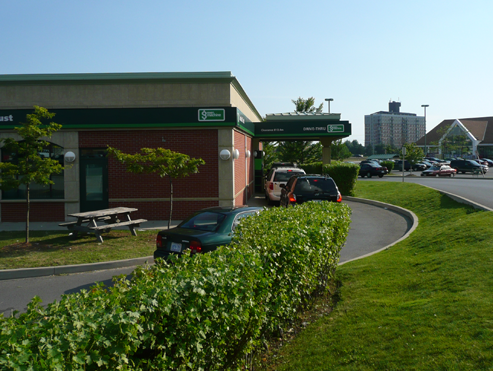 On my way walking to work this morning, I listened to a debate on CBC regarding whether or not cities should restrict, ban or do nothing about drive thru’s. For many people they are the ultimate convenience, while other health-minded folks see them as the scourge of the urban landscape. Although this debate is more prevalent in larger cities, it is still relevant in Kingston, and is one that I feel quite strongly about. I can appreciate the necessity of drive thru’s for disabled and elderly people, and even sympathize with parent’s who would rather not park their vehicles and unbuckle 3 kids just to get a double double, but something has to be done.

An all out ban is unrealistic as it would negatively affect the elderly and handicapped. I purposely didn’t include parents with small children, as I believe that they should take the time to set a good example, by parking their cars and going inside to get their fast food, or do their banking. Environmentally, there are two schools of thought on this “get out of your car” approach. Some say your vehicle creates less emissions in the drive thru, than if you were to turn it off, go about your business and start it back up again. Clearly that doesn’t take into account the 10 minutes you spent idling while waiting for half a dozen tacos without tomatoes and extra hot sauce. The opposition contests that older vehicles are the root of drive thru pollution, and hybrids would soften the impact of either waiting in the auto line, or parking your vehicle to go inside.

One thing’s for sure, Kingstonian’s are not going to sell their vehicles and buy expensive next generations automobiles just to save their favorite drive thru. Hybrid or not, when I picture the long lines at the Tim Horton’s drive thru in the morning, I can’t help but make comparisons to the overweight, chair-bound humans portrayed in Pixar’s newest film, Wall-e. Surely that’s a severe generalization, but the lesson is: “don’t let it happen to you.” Getting up out of your heated, massaging captains chair, isn’t bad once in a while, and as I mentioned it sets a good example for the next generation. Sure it might be inconvenient from time to time, and take you a bit longer when you’re in a rush, but it can help you burn a few more calories, and give you more opportunities to be social. Then again, I hate meeting new people in line ups.

I suppose the health benefits are ultimately nil if you’re waiting to appease your latest Mac Attack or quench your thirst with half a litre of sugar and cream filled coffee. Of course, the issue of why we even need these unhealthy fast-food and drive-thru services instead of “real food” could be argued, but that is another post entirely.

So after running through some of the environmental, social and health implications associated with using drive thru’s, it’s really up to you to make the decision. I tend to weigh the impact of drive thru’s on the negative side, and support restrictions on new developments that want to include drive thru services. That said, I think that it’s essential to keep drive thru’s open to serve those with mobility issues, however if businesses were to start losing income from strictly controlled drive thru’s, Tim’s and the gang might close them altogether, which helps no one. Hence, I think a more realistic approach would be scheduled drive thru service times, which should be limited to the major meal times. Throughout the rest of the day, we can all park it like they used to back in the day.

3 thoughts on “Death of the Drive Thru”