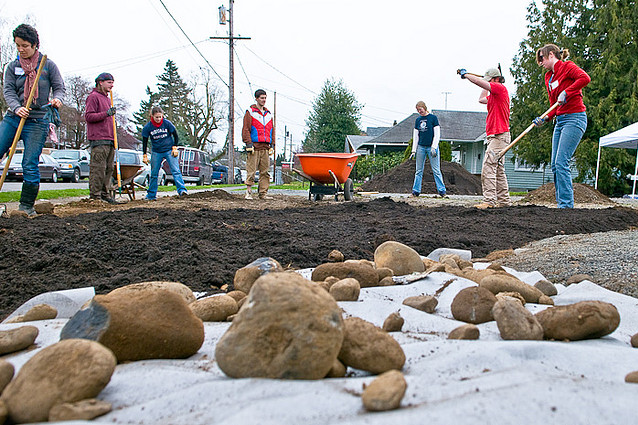 From parking lots to paradise. This is the basic premise of de-paving, a relatively new practice that involves transforming unnecessarily paved surfaces into new green spaces for the benefit of the community. Supporters of de-paving efforts outline the advantages of asphalt removal and subsequent greening initiatives as follows:

Impervious surfaces such as concrete and asphalt can be useful for providing access for pedestrians, bicyclists, wheelchair users, and cars. However, the paving over of millions of acres of land and vegetation have contributed to numerous economic and environmental problems. In many cities, over half of the urban land is paved for roadways and parking lots. While we may need sidewalks and roadways, we can minimize the pavement we use for driveways and parking areas, and thereby restore the natural environment. Ideally, we shouldn’t be paving over habitat and farmland to accommodate auto-centric development, but through depaving, we can reverse the damage!

Impervious surfaces prevent rainwater from entering the soil and instead divert it to nearby waterways. Along the way, the rainwater carries pollutants such as oil, antifreeze, plastics, pesticides, and heavy metals from the roads into local streams and rivers, devastating riparian habitat and polluting local waterways…the high volume of stormwater runoff forces untreated sewage into the rivers.

One might think that Kingston, a city that recorded the highest per capita private vehicle greenhouse gas emissions in Canada back in 2010, would be rather adverse to de-paving initiatives, which take away precious parking spots.  I mean, there’s nothing worse than circling the block twenty times, or being late for an important meeting as a result of parking snafu.  Am I right? This general sentiment is likely shared around a majority of the city, hence the staggering stats.  Nevertheless, all it takes is one reclaimed parking lot to get things moving.

Last month, the Mulberry School transformed a portion of their parking lot into a combined greenspace, playground and garden.  The volunteer and donation-powered DePave Paradise project replaced a 25 sq/m portion of the parking lot with soil and vegetation, which the school hopes will “expand the reach of this project beyond the schoolyard to the larger Kingston community”.  Hit play below for a timelapsed evidence of de-paving in progress.

How many other places in the Limestone City could do without a few parking spots to give way to some much needed greenspace.  Do you think de-paving will catch on in Kingston?  Drop off your comments below.

Thanks to Josh Lyon for the video, and fertile grounds for today’s photo of de-paving in action.

5 thoughts on “De-Paving the Mulberry School”