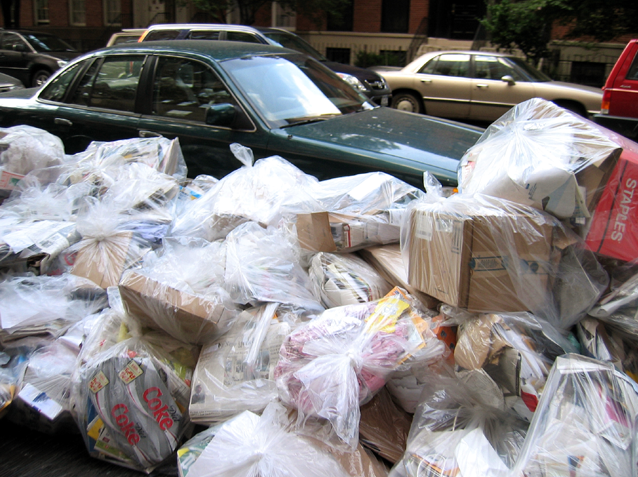 In March 2009, the City of Kingston launched the highly anticipated organic recycling program in an effort to reduce the amount of recyclable material ending up in landfills by 65 percent. About a month later, city officials announced that 35 percent of Kingstonians were using their green bins. You can interpret that number as either a solid start, or as a lukewarm reception.  Since then, while walking to work on recycling days, I’ve noticed that participation has somewhat improved in my neighbourhood, however it’s far from acceptable.  I can’t really speak for the rest of the city, but perhaps a recent recommendation to force Kingstonians to use clear plastic garbage bags is indicative of sub-par recycling across the board.  Accordingly, this week’s poll asks:

Do you support the use of clear plastic garbage bags?

I am still surprised when I meet someone who doesn’t recycle, especially if they are of the same vintage as me.  Since elementary school we’ve been taught to abide by the three R’s, yet it seems as though many people just can’t be bothered to take the extra time to sort their waste.  While I was initially indifferent to the recommendation to use clear plastic bags,  I’ve come to support it as a way to unveil people’s recycling sins.  Sure it’s one step away from physically going through everybody’s trash, but if it’s the only way we can ensure non-recycling dinosaurs do their part, then so be it.  But let’s take it one step further.  Instead of using clear plastic, can we please move to using bags that are plant-based?  This will undoubtedly be a contentious issue, so please drop off some additional thoughts below.  Special thanks to Susan NYC for today’s photo.