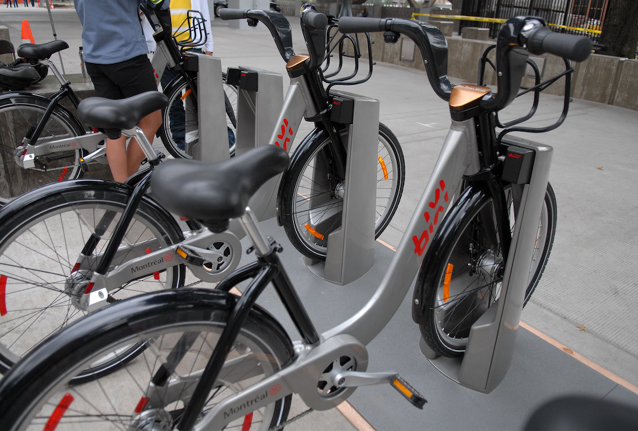 Allow me to put the cart before the horse on this one. What if Kingston adopted a bike sharing system as an alternative for daily commuters, and to accommodate recreational tourists? In case you are unfamiliar with the concept of bike sharing, the name is somewhat of a misnomer. Basically the networked system employs multiple self-serve rental stations that are strategically positioned throughout a given city, while boroughs such as Washington D.C. (SmartBike DC), Barcelona (Bicing) and Montréal (Bixi) have already adopted their own versions of bike sharing.  Think of it as a vending machine that supplies a temporary mode of transportation, while the vending machines can be relocated to accommodate demand, and bicycles can be returned to any station.

These systems are geared towards convenience, as they accept multiple forms of payment including online and subscription methods, allow 24-hour service, place no restriction on the amount of time you can rent a bike, and can be configured to provide vital stats regarding individual usage.  Users can look up their real time, cumulative statistics including:  total number of trips, total/average usage time, total/average distance travelled, total gas saved, and total reduction in greenhouse gas emissions.  As a city that’s trying to claim Canada’s sustainability crown, increasing bike usage will have a direct, positive impact on the environment, and help clear congestion on our streets.

Downtown Kingston, Queen’s, RMC and St. Lawrence campuses, the Kingston Centre, as well as Wolfe Island would be prime locations for future bike sharing hubs.  That said, providing rental bikes in isolation of key infrastructure may not be a recipe for success.  And here’s where the horse comes into the picture.  Kingston is severely lacking bike lanes, and a comprehensive recreational pathway along our waterfront.  If old cities such as London, Paris and Boston are making additional room on their streets for cyclists, and also incorporating bike sharing systems, why isn’t the Limestone City?

It is worth noting that Kingston already has a bike sharing service, which goes by the name of Yellow Bike Action.  Since 2000, YAB has been handing out free used bicycles to children in need, as well as providing affordable repairs and bike rental services.  As a grass roots initiative, YAB is starkly different than the systems mentioned above as they do not provide city-wide self service stations stocked with shiney new bikes, equipped with GPS and other bells and whistles.  Still though, for $5 a day YAB fills the void until the City of Kingston jumps on the bike sharing bandwagon.  Thanks to BikePortland.org for the photo of Montréal’s Bixi bike share system.