Late last March we came across a group of local citizens who were encouraging Kingstonian’s to sign a petition to permit backyard chicken coups.  Surprisingly, this issue was well received by City Council who passed a bylaw a few months later to make way for a pilot project.  Although we haven’t jumped on the backyard chicken bandwagon ourselves, nor have we been contacted by neighbours looking to do the same, we’re still supporters of this initiative.  Like it or not, in 2011 Kingston did not chicken out on embracing new, and possibly smelly ideas.

Hall Monitor: For The Birds 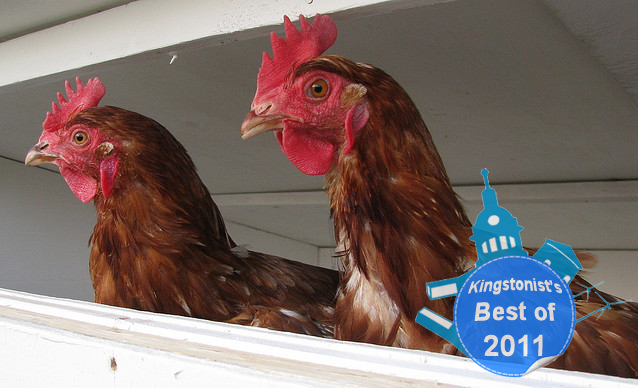 Council session Tuesday night had a large agenda and touched bits of the city small and large. From parking and projects to statements and sports, unless you had the agenda on-hand, I wouldn’t blame you in the slightest if you thought our elected officials had gone to the birds – which, given the amount of discussion around the topic, is probably a pretty good place to start.

Tucked into the report from the Arts, Recreation & Community Policies Committee, the amendment of By-Laws to Allow Backyard Hens was separated out by the Mayor (ahead of allowing one of council to do so) and – despite a comedic attempt to call the question by the Mayor – was the start of an incredible evening of debate. Councillor Berg – the first to speak – put forward a three-part amendment that would, in short, require would-be hen owners to notify their neighbours (And receive documentation to that effect), and also sets the hen project up as a pilot project (part 2 of the amendment) and would see this same council re-visit the issue no later than October, 2013.

Debate sparked over the definition of the word “sustainable”, the possibility of rats, noise, disease and predators, the cost and problems raising chickens and the shopping plans for feed, but in the end, the recommendation passed, as amended, and the later bylaw changes did too (With noted “opposed” votes from Councillors Hector and George) allowing residents the opportunity to own up to 6 hens.

In the end, this vote amends (Or directs staff to prepare amendments to) a number of by-laws dealing with house pets, waste and livestock. It also brings in key definitions (Such as ‘coop’ and ‘hen run’) and defines where such items can be located. We’ve covered the chicken and the egg debate previously, and will again, I’m sure, as our friends and neighbours bring the birds into our lives. Coops will need to be registered annually ($10.00) and you’ll be limited to six birds who can only be outside from 6:00 am – 9:00 pm. Cluck on.

Also Around The Horseshoe

Council session was also extended (to 11:30) and split (To finish on Wednesday), then later simply extended to finish agenda – both proposed by Councillor Downes, and things got a little feisty and heated towards the end with the Mayor reminding council – again – that a large number of the questions they continue to bring up might be better addressed by email with staff as opposed to at session. It’s a line we’ve already heard repeatedly, and I’m expecting to hear a lot more.

Council meets next on May 31st for the reconvening of the strategic planning session. City Council’s next session is currently scheduled for June 7, 2011 at 7:30pm.

Thanks to greengardenvienna for today’s photo.