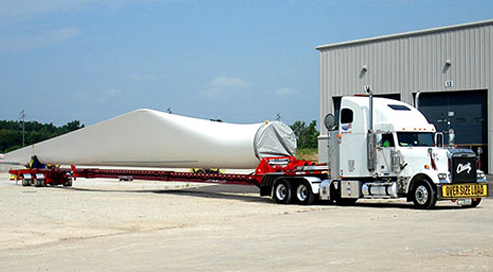 The last time I mentioned the Wolfe Island wind farm , I honestly hoped that the project would be delayed due to the growing concern from Island residents. It’s not as though I’m opposed to the idea of alternative energy, or wind turbines on the Island, but I certainly do not want the concerns of local residents cast aside without due process. Is this simply a case of David vs Goliath, or do the developers and Provincial Officials know something we don’t? I walk along the waterfront each and every day, and lately I’ve been noticing a large number of construction vehicles being ferried over on a private barge. This got me searching for answers, and I soon discovered that pieces of the wind turbines have already begun to arrive on the Island. It looks as though there’s no stopping Kingston’s windy skyline.

The Wolfe Island wind turbines are being shipped from Denmark and pulled up the St. Lawrence River by tugboat from Ogdensburg, NY. Seeing one of the six pieces of these massive turbines really puts the scope of the project into perspective. From the base of the tower to tip of the outer most blade, each turbine measures a staggering 125 metres. With pieces arriving steadily during the next 14 weeks, and construction already begun on a network of gravel roads around the generation site, the 86-turbine farm is set to be completed in March 2009. When they are finally turned on, they will generate enough energy to power 75,000 homes.

You can imagine the kind of impact this is having on the local residents . Loads of construction equipment and materials, as well as droves of construction workers, have essentially hijacked their relatively quiet community. That alone is enough to upset the population, but the kicker is the fact that their concerns have yet to be dealt with, and probably never will. I don’t think anyone on Wolfe Island wants to say “I told you so”, if the turbines kill off the bird population, but what else can you do? These are threatened habitats, and their loss may put yet another species on some forgotten endangered list. Is this what we call progress?

I can’t imagine what the view will look like. Although these turbines are massive and will probably be visible during the right conditions, I doubt they’ll really be looming over the Kingston skyline. That said, I am fearful for how this is going to turn out, for both the Wolfe Islanders and our feathered friends.

4 thoughts on “A Windy Skyline”