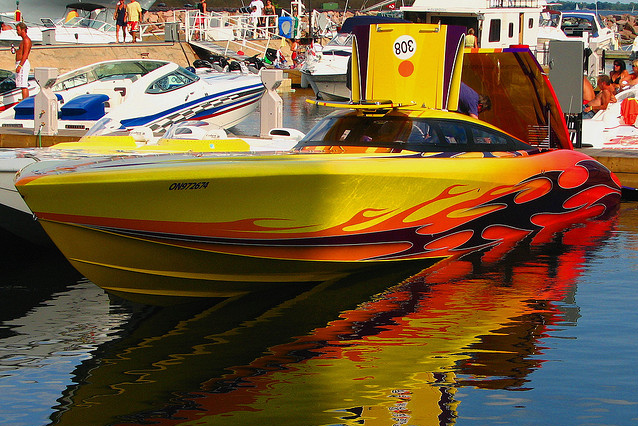 In the long list of regular suspects that are a part of Kingston’s Summer event schedule, no other recurring spectacle draws the crowds and critics like the 1,000 Islands Poker Run. Over the past few years, anti-poker runners have called for Council to put the kibosh on these gas guzzling games, or otherwise impose strict environmental sanctions in the form of a mandatory carbon tax for all participants.  While the vocal opposition has increased their efforts over the past few years, no real deterrents have been employed.  More importantly, the quiet majority has continued to vote with their feet and flock to Kingston’s waterfront so that they may catch a glimpse of these hulking marine machines. In the end, the resilience of the 1,000 Island Poker Run hints that organizers are far from giving up on the Limestone City, and vice versa, the economic spinoff is something the downtown Kingston is not ready to let go.

Which aspect of the Poker Run is more important?

The question about whether to allow or condemn the 1,000 Islands Poker Run is one of this city’s great divisive debates, on par with the likes of: where we should build the LVEC, should we demolish the Memorial Centre, do we want to make a bid for a local casino, and so on.  It’s an undeniable cash cow, with modest estimates from the Kingston Tourism suggesting that the event attracts 14,400 visitors and somewhere between $750,000 to $1 million into the city each year.  On the flip side of that equation are groups such as the Kingston Environmental Advisory Forum who suggest that the CO2 produced by the event is between 100 and 200 tonnes; roughly the same as a round-trip in a Boeing 757 from Toronto to Vancouver.

Are calls for a carbon tax the sort of tough love we need, or would this sort of action push this event, and possibly others, elsewhere with zero economic benefits for Kingston?  How can we strike a proper balance between doing solid business and what is right for the environment? Is harmony even remotely attainable since the source of income and pollution is the same?

Thanks to Edith Maracle for today’s photo, which came with the caption: all you need for one of these boats is a lot of money and ownership of a gas station.