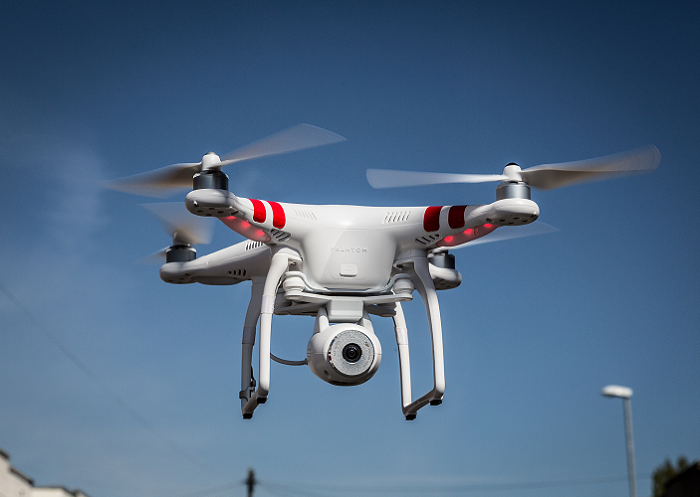 Last Fall I stumbled upon the YouTube channel for SkEye Stream, a self-described “drone business” offering spectacular views from above Kingston and southeastern Ontario.  Since then, SkEye Stream has uploaded a dozen or so impressive videos to YouTube showcasing breathtaking scenery from above City Hall during events such as the recent Limestone Race Weekend, while they’ve also hovered above other notable points of interest including the Time sculpture and the Glen Lawrence Golf Course.  The unique vantage point offered by this new startup has attracted hundreds of awe-struck viewers, as well as paying customers within the real estate sector.  What better way to help sell an estate than by offering sweeping panoramic videos from high up above?

Certainly not all drones and quadcopters in our skies are up there trying to make a buck, as hobbyists are also taking flight to capture their own imagery, race or simply prove their airworthiness.  At this point in time Kingston’s skies are far from congested by drones, however their popularity is undeniably increasing and will continue to do so as more affordable and technologically advanced devices enter the fray.  Take for instance the Lily Camera, a new drone whose mission is to follow its master around capturing cinematic quality HD video along the way.  Again, it’s hard not to be impressed by such devices and dream about the many ways they might be employed to help us in the future (ie pizza delivery).

Unfortunately, for every amazing quadcopter video on YouTube, there are dozens featuring expensive crashes at the hands of unskilled and unsafe operators.  The majority of these wipe outs take place in open fields, however some occur in more populated areas where the risk of injury caused by falling drones and debris is a real concern.  Further, as cities such as Vancouver have discovered, not all quadcopters are taking flight with honourable intentions, as some have been caught peering into the windows of personal residences.  These unfortunate incidents have left city officials playing catch up, trying to control where and how these drones can operate.  In anticipation of more of these devices hovering above the city in the not too distant future, what if Kingston were to promote the safe operation of drones and quadcopters?

Transport Canada offers very clear guidelines and directives concerning the legal requirements associated with operating drones and quadcopters.  These regulations are largely driven by the weight of the device and its purpose (ie commercial vs hobby), which essentially determines the necessity for a Special Flight Operations Certificate.  Other direction, which one might assume to be common sense, includes restrictions associated with operating near airports and military bases, flying higher than 90 metres or over crowds etc…  Even so, some believe that these regulations do not go far enough to address inexperienced operators and privacy concerns.  In this respect, cities such as Toronto are exploring additional regulations including “restrictions on the use of drones and photography above City outdoor recreation and park facilities” as well as mandatory permits to use drones in designated spaces.  One could easily argue that such regulations would not be out of the question in Kingston, but at this early stage in the game, they would definitely be premature.

Problems in other cities largely stem from a minority number of users who ignore common sense and give others a bad name.  Looking ahead, the City of Kingston could easily require all drone and quadcopter operators to purchase/carry a license and agree to follow set guidelines, much the same as we do with street vendors, buskers and so forth.  Not only would that ensure operators are held accountable for safe operation, but it could also allow the city to control both how and where these drones are permitted to operate.  Moving in a more positive direction, why not create a dedicated space for hobbyists to operate, similar to the city’s skate and dog parks?  Quadcopter parks could provide Kingston’s operators with safe spaces to practice and hone their skills, far and away from the hazards and obstacles of an urban setting.

What’s your take on the regulation, or lack thereof, concerning drones and quadcopters in Kingston and beyond?  Are you concerned about safety and privacy, or moreso focused on when you’ll finally be able to command a drone to deliver pizza to your doorstep?  Just how should Kingston proactively promote the safe use of camera-equipped quadcopters?

One thought on “What if Kingston…”